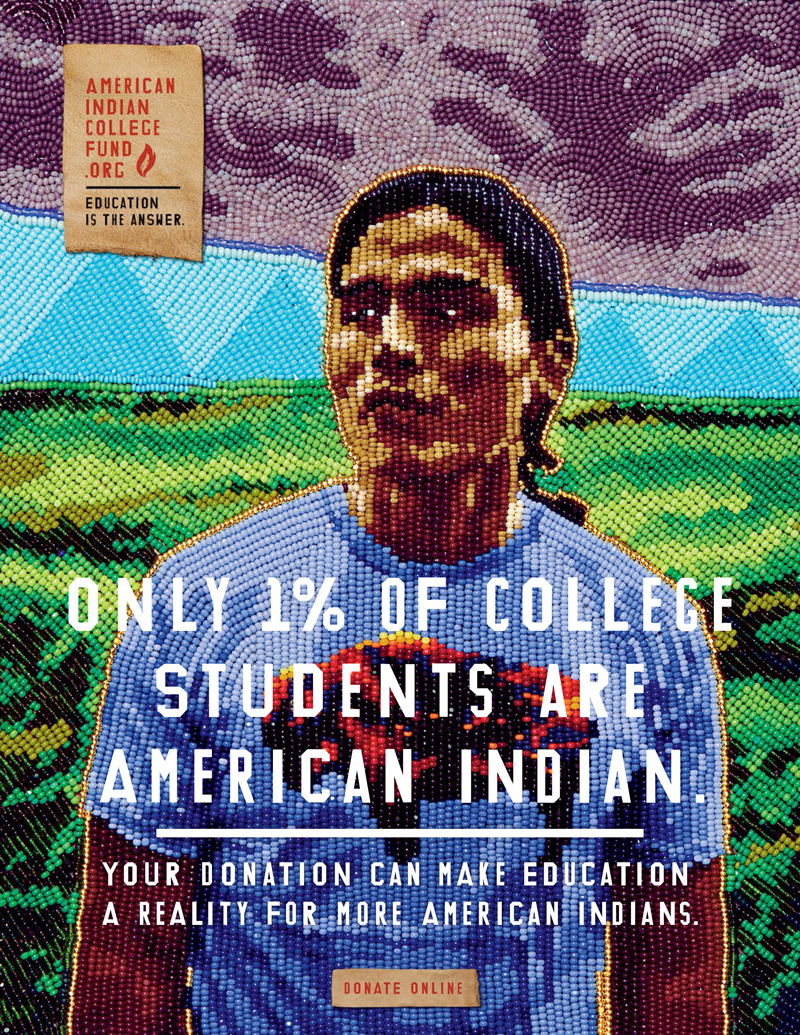 At the center of the American Indian College Fund’s new campaign is a staggering statistic—less than 1 percent of college students are American Indian. The College Fund joined forces with longtime partner, Portland-based advertising agency Wieden+Kennedy, to create a public service announcement to increase enrollment.

Cheryl Crazy Bull, President and CEO of the College Fund, said, “We are in the business of ensuring that American Indian students are able to use modern tools to build better societies in their communities and in the United States. A college education is a critical tool we can help students access. Our new campaign bridges the traditional world of the students we serve with that of contemporary society, in a respectful way to Native cultures while giving the public a glimpse of our students. Startling statistics deserve a creative approach to drive the message home. We are particularly appreciative of our long relationship with Wieden+Kennedy that resulted in this exciting and beautiful campaign.”

“We wanted to take a modern approach to traditional American Indian beadwork,” said Patty Orlando, Art Director at Wieden+Kennedy. “We spent a lot of time looking at the incredible photorealist bead pieces created by Marcus Amerman (a member of the Choctaw Nation of Oklahoma and American Indian college graduate) and were immediately drawn to his complex and visually striking imagery.”

Amerman created American Indian student portraits for the print campaign. Each portrait features more than 18,000 tiny beads hand-stitched by the artist. The beadwork in the television, print, and digital campaign works to raise awareness for the College Fund. The campaign includes the new tagline “Education is the answer” to inspire people to help American Indian college students get a college education.

Wieden+Kennedy has supported the College Fund for more than 20 years, lending its cutting-edge-creativity to generate awareness about the importance of education for health and prosperity for American Indians, their families, and communities.