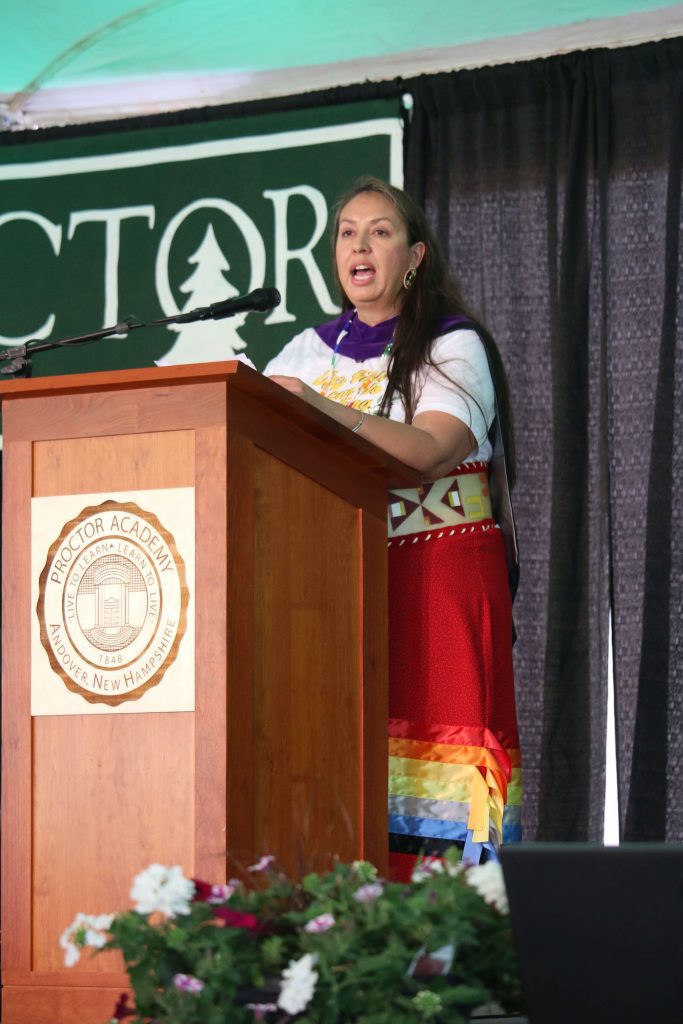 May 31, 2022, Denver, Colo.— Emily White Hat (Sicangu Lakota), the VP of Programs at the American Indian College Fund and a member of the Proctor Academy board of trustees, delivered the keynote to the graduating class of 2022 on May 28. Emily, a 1994 Proctor graduate, is continuing her family’s commitment to higher education.

Her father, Albert White Hat, Sr. (Sicangu Lakota), was an advocate for the revitalization of the Lakota language and headed the Lakota Studies Department at Sinte Gleska University (SGU), a tribal university on the Rosebud Reservation, where he taught for more than 30 years. In addition to his role at SGU, he taught Native American history, language, and culture at Proctor from 1985-1988 and served as an honorary trustee from 1989-2013.

Emily followed her older sister to Proctor, and Emily’s son, Mark White Hat, became the first American Indian legacy at Proctor Academy, graduating in 2014. The family tradition continued this year. Trinity Rivera White Hat was in the audience of graduates when her Aunt Emily spoke (Trinity’s father, Albert White Hat, Jr., is also a Proctor graduate). Emily spoke about the importance of students serving their communities; using the visibility that a great education provides graduates, finding a sense of belonging, and creating community. To see the event visit https://vimeo.com/event/959794/videos/714777167/. Emily’s address is at the 1:16 time stamp.

Emily was born in Rosebud, South Dakota and grew up in St. Francis, South Dakota. After graduating from Proctor, Emily earned an associate of arts degree in Lakota history and culture from SGU; a bachelor’s degree in forestry with a concentration in fire science and a minor in rangeland ecology from Colorado State University; and a law degree and natural resources law certificate from the University of New Mexico School of Law. She was elected to serve on Proctor’s Board of Trustees in September 2020. 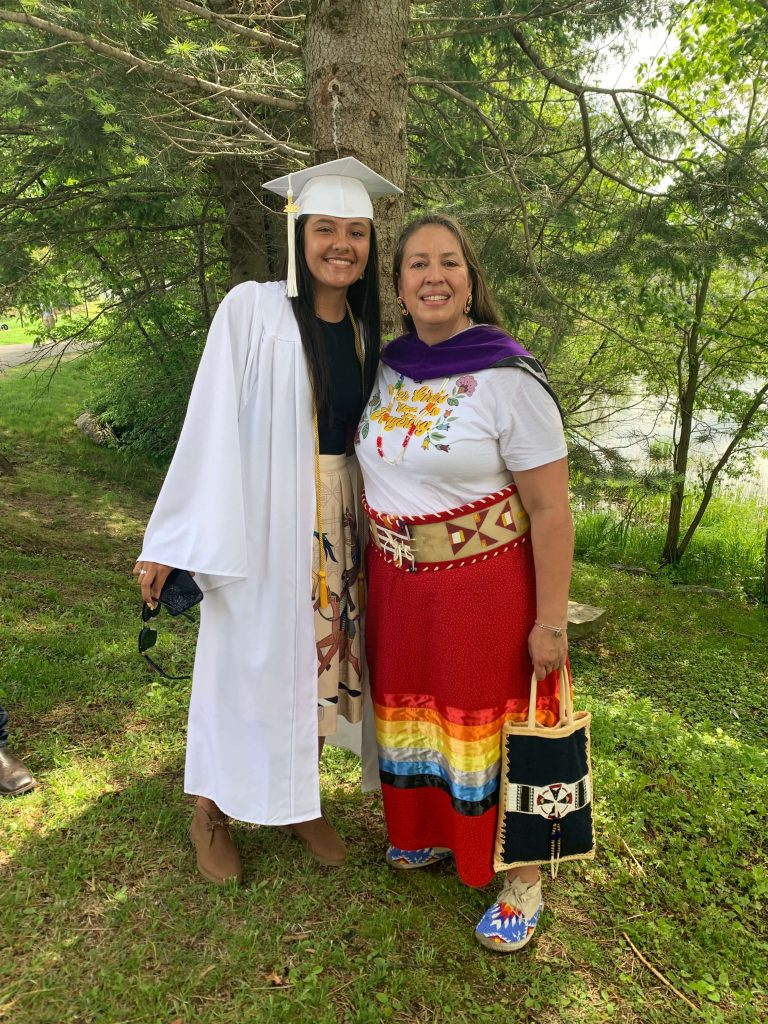 From left: 2022 Proctor Academy graduate Trinity Rivera White Hat with her aunt, Emily White Hat, a 1994 Proctor graduate and keynote speaker, who is the Vice President of Programs at the American Indian College Fund,

Emily incorporates her family’s and culture’s values into her work as the Vice President of Programs for the American Indian College Fund, where she oversees language and cultural revitalization programs. The College Fund elevates Native cultures, visibility, and voices and heals Native communities after centuries of federal Indian policy attempted to systematically erase them.

Emily says her experience at Proctor Academy opened the door to opportunities when continuing her education. Emily says there are options to continue your life’s journey, whether going directly into the workforce to find meaningful employment, going to college, or choosing to explore one’s passions and interests. Her experience as a firefighter, emergency medical technician, policy researcher, evaluator, combined with a legal background, have been vital to her work in program development and implementation, strategic planning, national outreach, qualitative research, writing, curriculum implementation, and evaluation. In 2015 Emily was recognized by the National Center for American Indian Enterprise Development a “Native American 40 Under 40” award recipient.

The White Hat family has been central to Proctor Academy creating relationships with Native communities since the 1980s. Proctor students have benefitted from those relationships through a learning environment that affirms Native students’ cultural identities and growth and curriculum that is an accurate representation of historical and contemporary Indigenous experience. Each year a group of Proctor students and faculty also travel to the Rosebud and Pine Ridge reservations to work and learn from Native people. 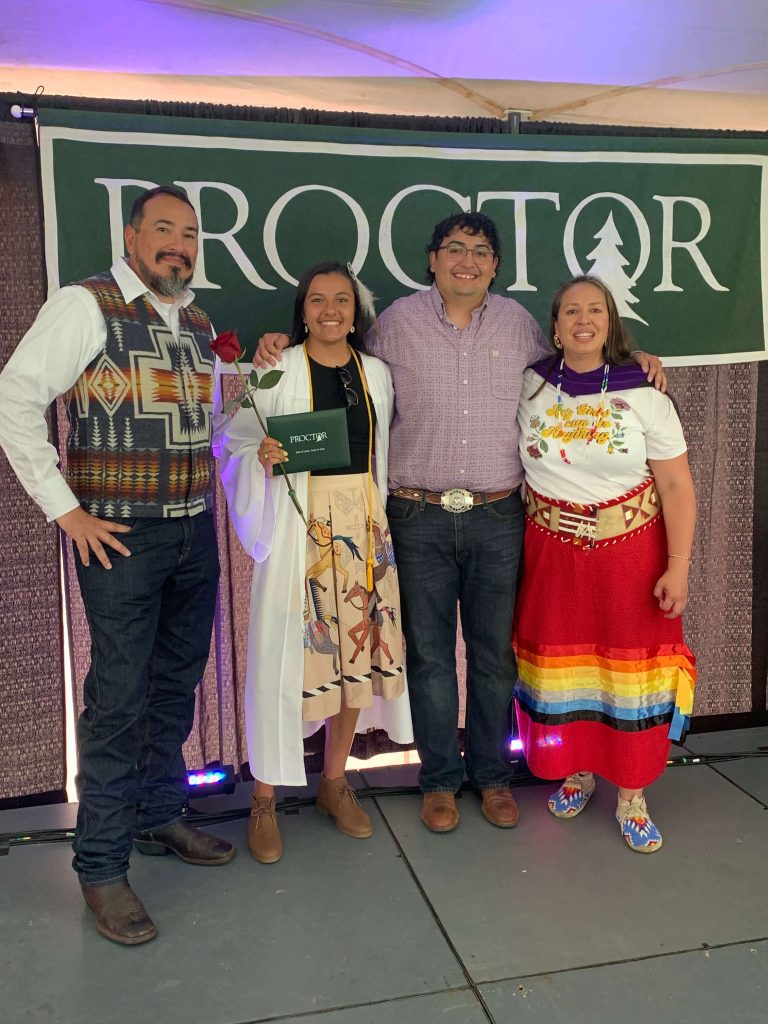 Brian Thomas, Head of School at Proctor Academy, says, “When I think of Emily, I think about what schools like Proctor say they want to do and then I see who Emily has become, it makes me think we should be doing more to provide the Emily White Hat’s of the world with an even greater sense of purpose, autonomy, and mastery while maintaining their own intrinsic cultural values from the communities like the Sicangu Lakota.

In many ways, Emily is the best of us. She owns her identity. She dives down deeply into who she is as a Lakota woman. She also deeply understands her self-worth. A few months ago, while on a panel discussion with other alumni of color in New England Board Schools, Emily said, ‘They [elite independent boarding schools] want us to be us until we are us.’ What that statement means to me is that our schools often try to change Indigenous or other students of color to be a certain way that is different from who they fundamentally are. Emily retained not just her culture while at Proctor, but she also kept her strong sense of self-worth after leaving the school. That is why she remains a shining example of who we are as a school.”

Photo 2: From left: 2022 Proctor Academy graduate Trinity Rivera White Hat with her aunt, Emily White Hat, a 1994 Proctor graduate and keynote speaker, who is the Vice President of Programs at the American Indian College Fund.