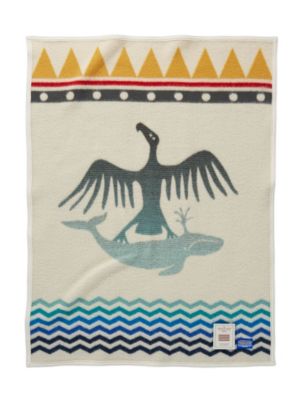 Since the Bishop family (now in its sixth generation of managing Pendleton Woolen Mills) opened the woolen mill in Pendleton, Oregon in 1909, the company has woven hundreds of thousands of Indian trade blankets, most of which were historically purchased by American Indians. The Bishop family and the town of Pendleton came together to build the town’s mill, which continues to weave Pendleton jacquard fabric for Indian Trade Blankets.

Today, Pendleton is one of a handful of American companies still weaving fabric at their own USA mills. They focus on legendary craftsmanship and world class innovation for the specialty woolens that comprise their home and apparel collections. All Pendleton items are woven with care and quality and carry the iconic label “Warranted To Be A Pendleton.” Pendleton has been manufacturing limited edition blankets for the American Indian College Fund, the proceeds of which have benefitted scholarships, for more than 10 years.

“Our heritage is integrally tied to the Native American,” says Mort Bishop III, president, Pendleton Woolen Mills. “They were our first customer. Our remarkable friendship over 10 decades is one that we hold with respect and appreciation. Pendleton blankets are woven for an entire culture, which gives us both tremendous pride and responsibility. This new scholarship fund is one way we can continue to help young people in tribal colleges around the country become stronger through a quality education.”