TCUs, Internships and College Fund “Steering Her on Her Journey” 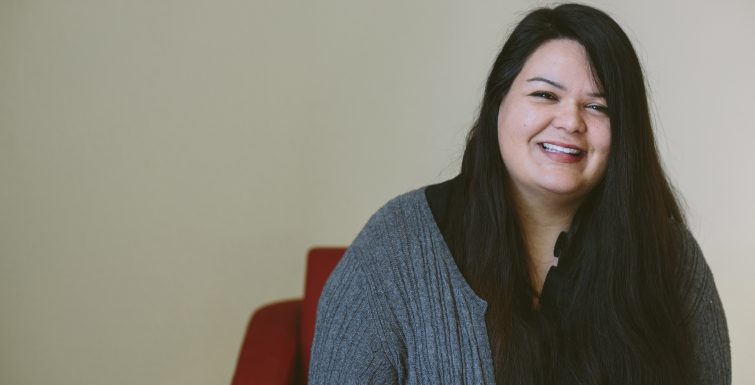 Robin’s journey from working in film to forging a career in the technology industry is the embodiment of the phrase “life is a journey.”

Robin began her academic career at Diné College, where she graduated in 2014 with dual associate degrees in Diné studies and behavioral science in 2014. After completing her first research internship in Washington, D.C. she went home to visit her mother before starting classes for her bachelor’s degree at the Institute of American Indian Arts (IAIA). During her visit, Robin decided to defer her education due to family issues. Her mother, however, knew Robin had potential and kept encouraging her to continue with her schooling. After spending time with her family, Robin enrolled in Salish Kootenai College (SKC), a tribal college in Montana. Although the school was far from her home, the semester started much later than at IAIA, and Robin was able to attend to her family’s needs while continuing her education.

It was at Diné College that Robin decided pursue a bachelor’s degree in computer engineering. After enrollment at SKC, the program there was cancelled for new students, so she changed her major to psychology (the closest thing the school has to a program in social policy) and information technology (because it gave her unfettered access to the computer lab). Robin explains, “At that point I was more confident that college is what you make of it. While these programs on paper might not be my first or second choice in degree programs, I was able to work within the community and environment I am motivated and connected to.” Robin also supplemented her education with Open Courseware MIT and internships offered by the Massachusetts Institute of Technology.

Robin has been fascinated with technology all of her life. She created an Indigenous-focused website which was shortlisted to join the United Nations Partnership for Youth, enjoyed the following of thousands of subscribers on various platforms, competed in major hack-a-thons, and managed and maintained various online networks. But, “What I didn’t understand or know is how tech could be a career… more pointedly, how it could be a career that could effect change within my community.”

In addition Robin also “felt quite alienated and lacked mentors, guidance, and understanding of the field at large. It wasn’t as if I was running into many (or any) Natives or even women at times at these hacking cons and tech conferences. It seemed like people who gave me advice all pushed me to leave the reservation and indicated that my culture was somehow holding me back – which I fundamentally disagree with, so I ended up sort of outlining the edges of the field.”

That all changed after Robin worked at her first internship in Washington D.C. at the prestigious National Science Foundation (NSF). There she realized her tech skills were useful for greater public good, and was lucky because she had a great mentor who encouraged her. “Even then I was sort of at a loss at how to combine two interests: Indigenous issues and technology, which is why my current research focus and interest is at the intersection of those two areas, and how technology can be used to circumvent a lot of issues in Indian Country.”

At the end of her internship, Robin’s supervisor at the NSF asked her if she had ever considered it to be a career path, because she was good at it. It was there that Robin showed her strong aptitude for tech through the independent research she conducted on tribal colleges and universities (TCUs) and their STEM (science, technology, engineering, and mathematics) courses, since she was so amazed by how many people were unaware of what they had to offer.  As part of that project, Robin says she worked to get TCU students involved in the STEM fields.

In retrospect, Robin says it seems she was meant to travel that path all along. “I have been fascinated by technology since I was knee-high. I have loved computers since I was a pre-teen… and I built my first computer from used and recycled computer parts at age 15 or 16 because I couldn’t afford a new one. I was always curious and wanted to take things apart and see how they worked. But when you grow up poor, you aren’t always encouraged to do that. Sometimes I took things apart and put them back together and they didn’t work. You can’t always experiment because your family is depending on something to work. But I always had curiosity and the desire to explore.”

Intellectual exploration is what Robin loves about attending a TCU. She says, “TCUs offer you room to explore what you are good at. People take you places where you couldn’t go on your own.” In addition to exploring new landscape of the mind, Robin says TCUs also connected her to internship opportunities, taking her around the globe. She worked at an internship in New Zealand doing biodiversity research, and she was feeling a little homesick and disconnected from her school and community, so she logged on the Internet to feel more connected.

While on her school’s bulletin board, she saw an ad for Roadtrip Nation, a national television program. It noted that the show was teaming up with Microsoft to sponsor a four-part series called The Code Trip. The show’s producers were searching for minority students studying tech who wanted to explore potential opportunities in the field.

“I decided to apply, thinking it didn’t hurt to try something. The worst that could happen is I would fail or someone would say no. I figured it doesn’t hurt, I just learn from it,” Robin says. She made a videotape in which she explained how she got into tech and why she likes it. After speaking with the producers she assumed she was not chosen. But unknown to Robin, another journey loomed on the horizon.

Robin was selected with two other students to pilot a large green RV across the continental U.S. for five weeks to make stops to speak with experts in technology in order to learn more about opportunities in tech.

Robin laughs, “I was petrified when I was behind the wheel. I really had to concentrate. It takes a team to drive a vehicle that size”—no easy task in cities like Chicago, Los Angeles, and New York. But the experience of meeting tech professionals was incredible because “We got to spend time with people like ourselves who are not always represented in tech. And people were very surprised to see me as a Native woman, surprised that I can do tech. We had great talks about what it is like to be ostracized or feel underrepresented in the field. I was glad to hear how they got through it. It also made me more focused than I was before.”

Both in her internships and her formal education, Robin’s laser-focus will pay off in the spring of 2017. She is on track to graduate from Salish Kootenai College. And then, another journey begins.

Robin wants to pursue a career in tech policy, which encompasses the ethics of technology and reaching out to underrepresented communities. She knows this means more school: first a master’s degree and then a doctorate. But her first career step, Robin says, will be to work at a reservation school before returning to Washington, D.C. “It doesn’t make sense to get removed from the community if I am going to make policy for it,” she says.

Hindsight is always 20/20, but when looking in the rear-view mirror, Robin says she is delighted with the role tribal colleges, her internships with the National Science Foundation (NSF) and Quality Education for Minorities (QEM), and the American Indian College Fund had in steering her on her journey.” I would not be who I am without the support and acknowledgement of the College Fund,” she says. After receiving a letter with a necklace acknowledging her scholastic achievements and scholarship, Robin says she treasures and wears it to this day. “It made me feel supported and part of a bigger community. No one had called me a scholar before. But now thanks to tribal colleges and the College Fund, I can see the changes in myself) and I feel part of a community and I am excited.”

END_OF_DOCUMENT_TOKEN_TO_BE_REPLACED

July 6, 2022, Denver, Colo.— The American Indian College Fund, a national non-profit organization with a mission of...