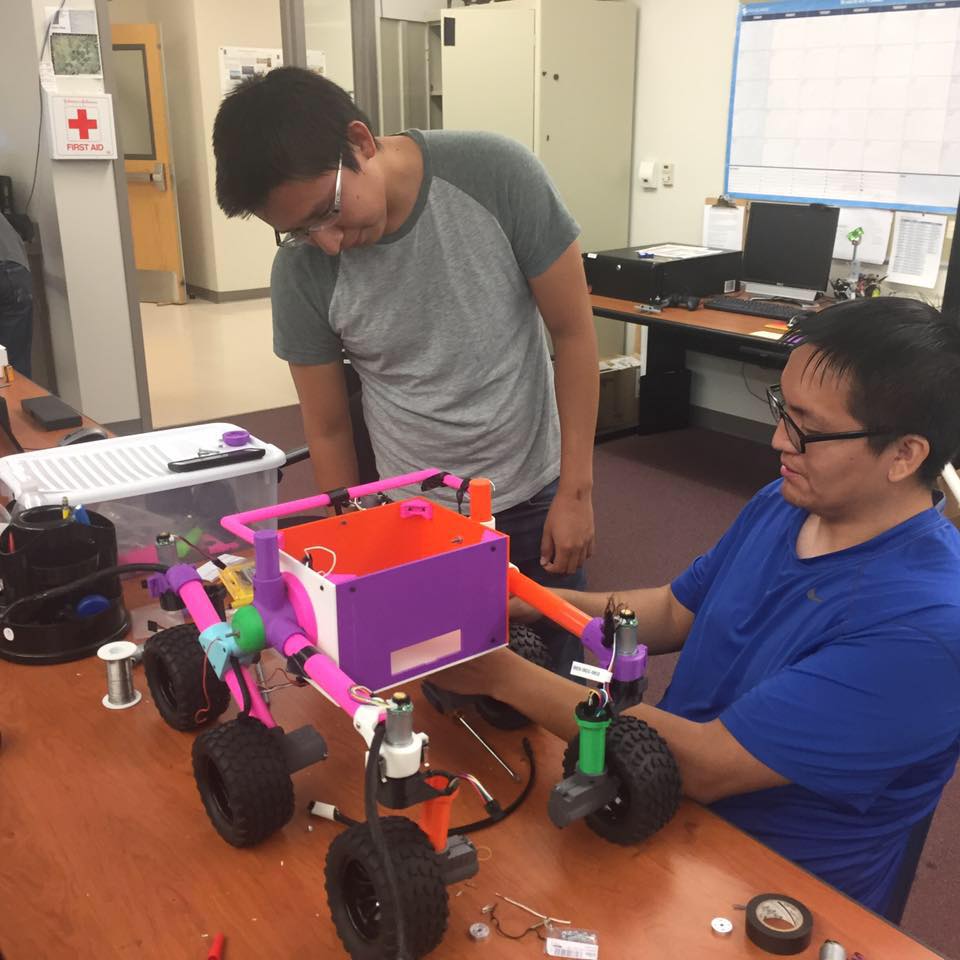 SIPI students work on their Educational Mobile Rover, ROV-S. ROV-S (SIPI Mars Rover) was fully designed, developed, and manufactured at the SIPI I-C-MARS VIP ROSE STEMS Engineering and Engineering Technology Laboratories.
ROV-S is capable of operating in both semi-autonomous and fully autonomous modes. ROV-S is capable of process sing sequence of commands stated in a number of Native American languages and it can converse in American English using Amazon Alexa!

SIPI’s pre-engineering program incorporates hands-on and intergenerational learning in its STEM programs and research. Graduate students mentor undergraduates, undergraduates mentor high school students, and so on under the guidance of elders. Using this method, SIPI has increased the number of Native Americans enrolling in and persisting in STEM fields, while also exposing students to pathways for furthering their education.

Dr. Sherry Allison, President of SIPI, said, “I am very pleased and honored to serve as President of the Southwestern Indian Polytechnic Institute, where our faculty and staff work diligently on behalf of student success. This distinguished award exemplifies the hard work, commitment and dedication of our students, faculty and staff.”

Dr. Nader Vadiee, Faculty and Coordinator of the Engineering and Engineering Technology Programs at SIPI, said, “Throughout SIPI’s pre-engineering program’s 10-year existence with more than $5 million in grant funding from federal agencies such as NASA, it has collaborated across the institute with STEM and vocational programs in research, outreach and student education. The pre-engineering program also organized four Tribal College and University (TCU) Summer Institutes and won several national honors. The TCU Toyota STEM award underscores the important work that SIPI, with the pre-engineering program, is doing to educate the next generation of STEM leaders in our communities.”

SIPI was also chosen for the award to allow it to continue its research on the impact of climate change on watershed areas in the Southwest; ecological research on plants and animals in biome transition zones; studying and forecasting the future of dry lands; and research, education and outreach on the reactivity of abandoned uranium mine waste in New Mexico.

Cheryl Crazy Bull, President and CEO of the American Indian College Fund, said, “The College Fund appreciates Toyota’s commitment to supporting innovation and encouraging a diverse STEM workforce. The contributions of our students and their communities to a better society is strengthened by this support.”

Toyota has supported Native American education through the College Fund since 1999, helping nearly 1,500 Native students earn a college degree with the Toyota Tribal College Scholarship Program. In 2014, Toyota provided $1 million to the College Fund, helping with additional scholarships and programs at TCUs.

“Each of these schools create a path to opportunity, preparing students for the next generation of jobs in science, technology, engineering and math,” said Al Smith, group vice president, Toyota Social Innovation. “We congratulate each of the tribal colleges and universities and the students for their work in STEM fields.”

The Toyota TCU STEM Award was open to all TCUs with an established STEM project or program. When choosing awardees from applicants, the College Fund selection committee considered the factors of graduation, retention rates and impact on students pursuing degrees in STEM fields.