Social Justice Through Education a Shared Sentiment for Empowering Nations 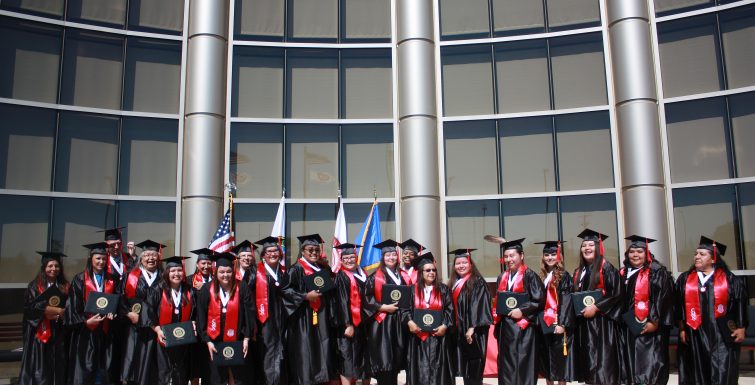 I was inspired to see Hilary Pennington’s article, “Rethinking scholarships as social justice” in the Ford Foundation’s Equals Change blog. Her article examines the approach in action through the implementation of the Ford Foundation’s International Fellowships Program, which spans 22 countries and a decade to support emerging leaders who face discrimination because of their gender, race, ethnicity, religion, economic status, or physical ability. Her essay opens the door to discussing and examining further why scholarships are particularly important to indigenous people as tools of social justice and opportunity.

Here at the American Indian College Fund scholarships are the underpinning for social justice in American Indian and Alaska Native (AIAN) communities. Scholarships support students in their path to better lives for themselves, their families, and their tribes.

Pennington speaks to the importance of educating leaders in marginalized communities to further social justice in some of the world’s poorest countries. Countries in Africa, Asia, and the Middle East were routinely plundered for raw earth minerals, timber, rubber, and oil. The history of colonization undisputedly left a swath of poverty and dis-empowered individuals in its wake with regard to political contributions, education, and control over the nation’s resources. The College Fund shares The Ford Foundation’s mission of social justice through scholarships and empowering citizens from nations that were weakened through colonization, however, we focus within the borders of the United States. Like peoples of other colonized nations, AIAN people were and still are sovereign nations, and in many cases their experiences parallel those of peoples living in countries in Asia, Africa, and South America as external nations imposed political systems that excluded and oppressed original inhabitants to wrest control of valuable land and resources.

American Indian and Alaska Native nations in the United States remain sovereign nations. They have a special relationship with the federal government based on treaties. Tribes share the experiences of other former colonized nations. The struggle continues today because the political and social inequality rooted in colonization has led to deeply entrenched poverty among indigenous peoples. The many other issues in the news: health care inequalities, substance abuse, lower high school and college graduation rates, and the like, are all merely side effects of endemic poverty (The U.S. Census Bureau reported its 2014 one-year estimates at 28.3% of AIAN people are living below the poverty line, compared with 15.5% of the overall population). Rather than treating the many symptoms related to poverty, the American Indian College Fund believes that education is the answer to empowering individuals and creating thriving Native communities.

Pennington referencing significant recent scholarship gifts to prominent institutions says it remains to be seen whether scholarships reach non-traditional candidates to “actually challenge entrenched systems of inequality,” stating that too many scholarships reach students who are already at the top. At the American Indian College Fund, we know that in addition to the best and the brightest students in AIAN communities there are many deserving students who have aspirations for a higher education. These students, too, can and should be encouraged to make important contributions. In Native communities where poverty is endemic, it is AIAN students who are often left with few options for a higher education.

While scholarships provide access to institutions of higher education, their symbolic value cannot be taken for granted. Scholarship support, coupled with the student services developed for AIAN students by tribal colleges, signals to our students that they are seen, that they are heard, and that we stand with them. We agree that non-traditional students are necessary for any movement to dismantle systems of oppression. Thirty-nine percent of the students the American Indian College Fund supported in 2014-15 with scholarships were first-generation students, and of those 49% had dependents and 38% were single parents. In addition, the students we support are non-traditional in that they are older, with an average age of 29.

Current and future leaders of social justice movements for racial and gender equity have and will continue to have tribal college degrees. 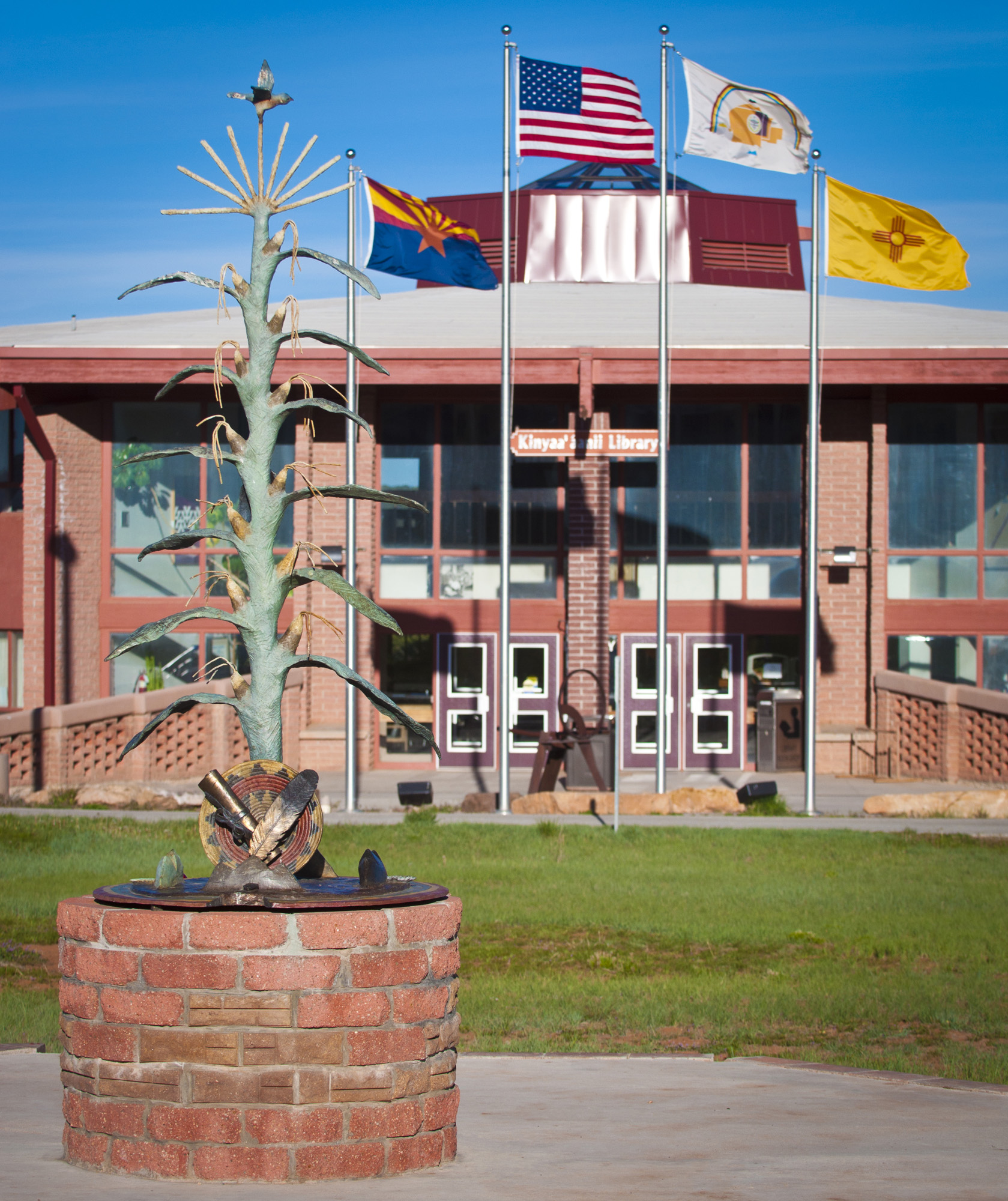 View of the Diné College library in Tsaile, Arizona. Diné College was established in 1968 as the first tribally-controlled community college in the United States.

Tribal colleges and universities were created during the Civil Rights movement by tribal nations for just that purpose. Tribal leaders saw the need to educate the next generation to prevent “brain drain” and to lead their communities in business, health care, law, education, and science. These leaders knew that access to an affordable, quality higher education while preserving their cultures was the key to their endurance and success. Today the American Indian College Fund provides monetary support for 35 tribal colleges and universities serving AIAN communities nationwide and also provides students with scholarship support to attend them. It is interesting to note that tribal colleges and universities led the way with grass-roots, tailored education programming that reached deep into the community, serving the needs of many community members other than just students, in the same model that the United States Agency for International Development has found to be most successful today. Led and staffed by dedicated local community members, tribal colleges have also established culturally based early childhood education programs, health clinics, libraries, adult education courses, and more, which has expanded the sustainability of Native communities, their cultures, and their traditions.

Like the Ford Foundation, we find that scholarship recipients develop the skills needed to make a positive global impact and find solutions to increasingly complex world challenges, such as environmental degradation and sustainable business development. Indigenous communities are often ground zero for observing the effects of global climate change, and Native scientists educated at tribal colleges and participating in NASA and College Fund research programs are studying first-hand the impacts on water and soil quality, impacting not just the community and region, but the entire nation.

We are passionate in our belief that a higher education will ensure that the inequities of colonization can be remedied and that our current and future generations in Native communities succeed. Tribal colleges educate teachers who serve as role models in schools in Native communities, where today the majority of teachers are still non-Native. They educate health care providers who integrate traditional and western practices of medicine for effective healing practices for their communities. They educate community leaders like Kevin Killer, a member of the Lakota nation who grew up in Denver but went back to his community to attend and graduate from Oglala Lakota College. Today he serves his community as a South Dakota state legislator. Killer recognizes the importance of education in creating economically sustainable communities, saying, “Oglala Lakota College and tribal colleges in general help provide educational opportunities to members living on reservations. Without these opportunities there would be an even steeper hill to climb towards social justice. Having an institution of higher learning in so many communities around the nation is a privilege that many younger tribal members have only recently gained access to in the last 40 years. Tribal colleges serve as the impetus to many opportunities, including my own story of running for elected office. That would have been difficult at a larger institution.”

Killer is particularly interested in representing young people, as he serves a reservation with many challenges and a high birth rate (in Shannon County, half of the population was under the age of 18 in 2013) and he wants to ensure his constituents receive the representation, health care, and education they need and deserve. This past session Killer sponsored successful bills to create a paraprofessional tuition assistance scholarship program, a Native American achievement schools grant program, and instruction on South Dakota’s tribal history, culture, and government.

We at the College Fund believe that scholarships are the ultimate tool in social justice, helping to heal the wounds caused by poverty and injustice by giving students who otherwise could not afford an education opportunity and hope for a better future. The process is slow and inequality persists today—still only slightly more than 13% American Indians aged 25 and older have a college degree according to the U.S. Census—less than half of their non-Native peers (28.3%) counterparts. But like the Ford Foundation, the College Fund is committed to social justice by creating opportunities for all, and creating awareness about the transformative power an education has on entire communities and the need to support educational opportunities for all.

Global injustices exist within our own borders.  At the American Indian College Fund we stand with Native students to support scholarships and programs that help them get a higher education. We invite you to join us as we help our students to excel and go on to rebuild prosperous Native communities for today and for future generations.