The NEA Foundation and First National Bank of Omaha to honor American Indian College Fund on February 9, 2018 in Washington, DC for their work to empower Native students

WASHINGTON, DC  – By 2020, 65 percent of all jobs will require post-secondary education. But only 13.8 percent of American Indians have a college degree – less than half the national average. Fighting this dynamic is the American Indian College Fund, providing direct, focused solutions that enable American Indian youth to succeed in college and beyond.

To recognize its profound impact on public education and its role as the nation’s largest charity supporting Native higher education, the NEA Foundation will present the American Indian College Fund with its First National Bank of Omaha Award for Outstanding Service to Public Education on February 9, 2018 during its annual awards gala in Washington, DC.

Driven by the belief that education is the answer, the College Fund has provided more than 125,000 scholarships totaling more than $100 million since its inception in 1989. It also supports a variety of academic and support programs at the nation’s 35 accredited tribal colleges and universities, which are located on or near American Indian reservations, ensuring students have the tools to graduate and succeed in their careers.

“The American Indian College Fund recognizes that higher education is vital not just to the Native community, but to our nation as a whole. They are committed to helping their students financially, socially, and emotionally, and to being a voice for American Indian students in the national education conversation,” said Harriet Sanford, President and CEO of the NEA Foundation. “We are proud to recognize their many years of success, and the value of the work they do.”

Cheryl Crazy Bull, President and CEO of the American Indian College Fund, said, “We are deeply honored to be recognized for the success of our students. Through our scholarships and student success services, thousands of American Indian and Alaska Native students have successfully graduated from tribal colleges and universities and other higher education institutions. We are proud to be part of the persistence and courage our students need to overcome tremendous obstacles to go to college.”

The outstanding service award pays tribute to those who have significantly increased understanding of public education or have otherwise dedicated themselves to serving educators and students. Past recipients of this prestigious award include Title IX advocate Billie Jean King, Sesame Street Workshop, the NAACP, Nickelodeon, the Hispanic Scholarship Fund, and Global Kids.

The award is part of the NEA Foundation’s Salute to Excellence in Education Gala, an annual celebration of the men and women who work in America’s public schools. The NEA Foundation’s gala will also honor 38 public school educators nominated by their peers for having attained the highest teaching standards, as illustrated by their exemplary instruction, advocacy for the profession, and staunch support of public education. It attracts more than 850 of the nation’s leaders in and supporters of public education. This year’s event will be hosted by director, actor, and choreographer Debbie Allen.

The gala will be live streamed on Friday, February 9 beginning at 7:30 p.m. ET here. 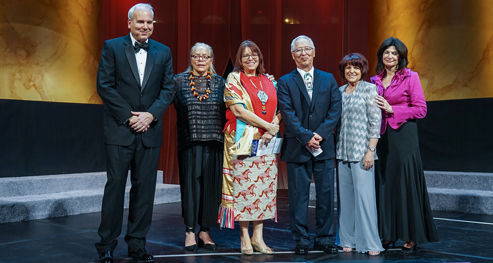 Cheryl Crazy Bull and Dr. David Yarlott accepting the award at the Gala on Friday, February 9, 2018.