Civility, Complicity and Silence: Lessons from Our Ancestors 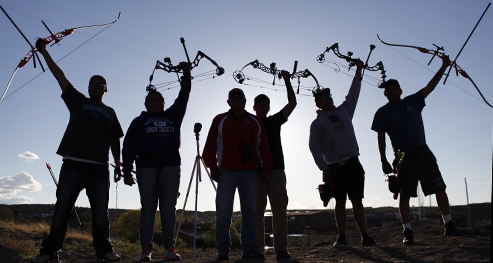 Right after the presidential election, I sent a message to our students urging them to practice self-care in the face of expected increases in racial, gender, and religious discrimination fueled by the divisions the election exacerbated – divisions that were both obvious in the rhetoric and actions of the candidates and in the electorate and which are also hidden in the language of nationalism. My message spoke to the choices that we each have in how we will respond and the awareness that we must have when we choose to be silent or speak out.

Since that time, I’ve had many conversations about the uncertainties faced by students, by indigenous people, and by the higher education community. We don’t really know if we will continue to have the resources we need to prosper in American society. Literally hundreds of years of progress, both on a personal level and as tribal communities, are at risk.

I had planned on writing a blog post about civility and the ways that our ancestors spoke the truth and through that truth engaged in dialogue that led to better and more inclusive decisions. I planned to recall the value of listening and the importance of restraint when speaking. I wanted to share the very democratic principles exhibited by our ancestors and by our tribal relatives today – the principles of inherent rights that cannot be taken away such as the right to self-governance, the right to consent to authority, and the right to citizen participation. Those principles of democracy were practiced by our people in various ways since time immemorial. We have specific ways that we enact those principles in our homes, in our social and religious practices, and in our governments. Examples include something as simple as a talking circle, where everyone has the opportunity to speak and to be heard, or something as complex as the negotiation of an agreement among competing tribal nations. No matter the situation, our ancestors and our people today have strategies and structures, ways of interacting and being that strengthen our societies through individual and group engagement.

Our people highly value listening and the silence that goes with it.

Yet I realized that in this time of uncertainty and even fear for our well-being and for our futures, silence takes on a different meaning. Silence today can imply complicity with behaviors and actions that we do not value, as indigenous people and as human beings. Especially now, our choice to be silent is one that must be carefully measured against the implications of that silence. Silence can be not speaking up, not taking action, or it can be as insidious as offering an alternative explanation for the truth of what is happening.

We have the opportunity to advocate for students, for higher education, and for indigenous people. We do not have to be silent. We can respond through the mainstream media, through social media, and through outreach to legislators, policy makers, and our neighbors, to the lack of responsiveness to both the higher education community and to indigenous peoples by the people whose decisions regarding programming and funding directly impact our daily lives. We can create positive outcomes by offering strategies that we know work – strategies that build both better lives and better communities. We can put our own resources toward increased public knowledge about American Indians and tribal colleges by sharing the College Fund’s media. We can contribute time, relationships and money so that our students and our indigenous people are not silenced but instead have a powerful voice.

Our students are so inspiring. They stand up every day – they are not silent. They want an education and they want a better life for themselves and for their families.

Our Native students are the face of courage. I honor them by standing with them, and by choosing not to be silent.