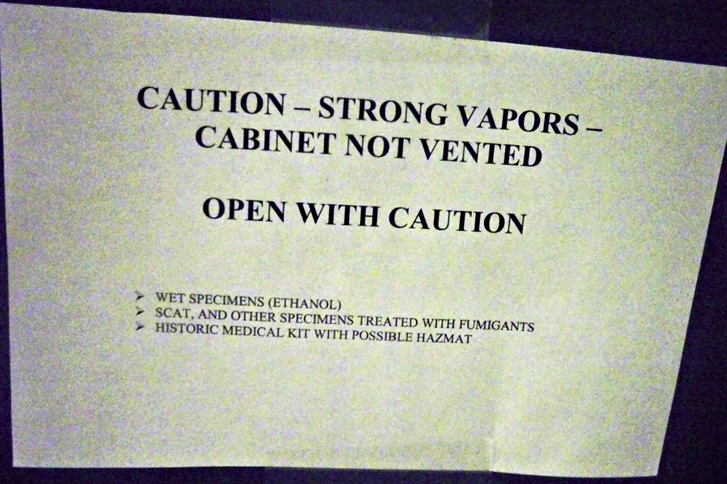 This is the fourth part  in a series of blog entries by our scholar Deanna, who is writing about her internship experience at Mesa Verde National Park. Next week will will meet Wynette from Occidental College in L.A., who is working at the Diné Policy Institute this summer at Diné College.

“The cabinet looked like something out of my eighth grade biology class; you know, the pig fetus in a jar and other floating specimens your teacher might’ve collected. The second I pulled a drawer I regretted that decision. Not only was I looking at a bunch of disgusting specimens, I got a lungful of formaldehyde! “

Day 4: Location – Mesa Verde National Park, Research Center. Objective: Finish the annual random inventory. Problem: more items are added on this day.  Yes it’s true, I found myself still marooned in the repository, and it was a blessing to not be alone back there or it t would’ve dragged on and on. We finished going through the list but we had to try and find items we were unable to locate the day before. Some things just weren’t meant to be found. From there we had to defeat the new additions. These were easier than the rest of the list because all of the items came from Yucca House. There are only a few places Yucca House items can be found. There’s so little stuff from there because the site is unexcavated and not located within the park boundaries. It is its own park, Yucca House National Monument.  The things from Yucca House are only natural resources, meaning they’re flora and fauna specimens. This is where I got grossed out. 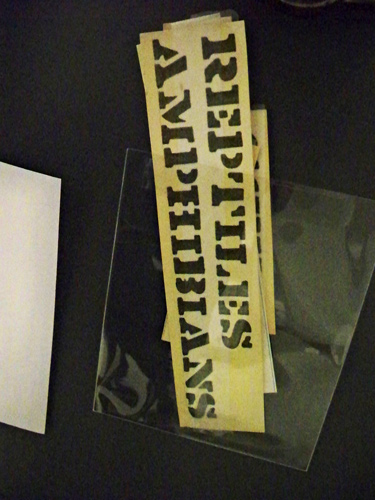 Looking for the Yucca House items introduced me further to the entomology cases filled with nasty bugs. But that’s not the thing that scared me on this day…it was the formaldehyde cabinet. The last item we needed to find from Yucca House was a rattlesnake in a jar. When I arrived at cabinet G 200 I noticed a little non-threatening sign warning about strong fumes. I proceeded to cautiously open the cabinet and behold, no smell! Before I started digging around I got stuck on stupid and just stared at what was inside.

Regardless of the stench, I was determined to see this pickled snake. All of the jars on the shelf that were supposed to contain the snake were wrapped up. Lauren and I both didn’t want to start tearing them open, especially because they probably smelled even stronger when unwrapped. I got the bright and genius idea to look for jars on the other shelves, another decision I came to regret. The first thing I saw floating around was a milk-white, bloated grub. Imagine what would happen to a maggot if you gave it growth hormones and then pickled it. Apparently it was from Yucca House, but it looked like it was more likely to be found in Africa. These were the things that haunted my dreams. I startled my co-worker somewhat as I started screaming out “No!” and tried to wipe off invisible bugs. I hate creepy crawlies.

I was rescued from having to return to the larvae creature after my little meltdown because I had to take my computer certification test. The NPS workers have to retake this computer test every year. It consists of questions about things that are allowed and prohibited while using a federal computer. We had to read the computer regulation handbook and then finished the test.