This the eighth part in a series of blog entries by our scholar Deanna, who is writing about her internship experience at Mesa Verde National Park. 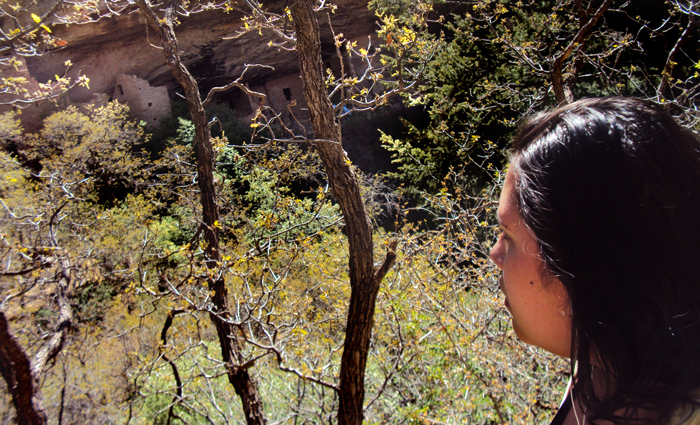 On Monday of my second week at the park I began the longest project of my internship.

Every year for over the past 20 years, Mesa Verde has held consultation meetings with the 24 affiliated tribes. My mentor, who has been in her position as a curator for a little more than a year, noticed that the notebooks containing the records of these consultation meetings with the tribes were becoming very fragile. She felt the valuable information inside would need to be re-housed. In addition, all of the NAGPRA notebooks were littered with social security numbers from tribal representatives in attendance at the meetings. Those numbers were required so that Mesa Verde could compensate them for their time at the meeting, but they hadn’t been erased. I think that when the information was taken back in the early 1990s that identity theft was not much of a problem, since the Internet was still in its infancy. I was in my infancy in the 1990s, too, along with the Hubble telescope. Either way, I started my journey back to the 90’s. I hope no one feels old from those observations.

My colleague and I were encouraged by our mentor to read through the entire notebook so we could get an understanding of the process. After we got done erasing personal identifying information, we would read the minutes taken from the meetings. I felt so privileged to have access to this information. Reading through the minutes let me see what was concerning the people who are affiliated with this area.

In the beginning, according to the minutes we perused, the main concern was getting the displays of human remains out of exhibits and back into the ground so that the ancestors could be put to rest. This process wasn’t fully accomplished until 2006. Another noteworthy thing was the tribe requested to have a cultural/visitor center. Even though Mesa Verde has a lot of information on hand about the ancestral Puebloans, the tribes wanted a representation of modern Pueblo people included for the public. I believe that this is a necessity also, because I have noticed that many people inquire about what happened to the people who used to live here. As a result of the tribes’ and public’s interest, the visitor and research center has become a reality.

It was a revelation to see an idea mentioned over 20 years ago coming to fruition. The visitor center is on its way and is due to be completed in spring 2013. Currently under construction, it can be viewed from the highway. Its function is to attract highway travelers into the park by showcasing it main attractions. The current visitor center within the park will be converted into the new tribal cultures center, where there will be room for Native American artists to sell their work.

I learned so much about the consultation meeting process, how concerns have changed over the years, and how some concerns have not changed. As can be expected with 24 different tribes, they do not always see eye-to-eye due to historical and cultural differences. There is also a difference between tribes that are traditionally associated and culturally affiliated. In simplest terms, traditionally associated means that particular tribe is historically associated with the land or the area, but culturally affiliated pertains to the other tribes that are directly related to the ancestral people that used to live there.

The actual burial took a long time to implement due to the careful planning involved. It is extremely difficult to make a plan that everyone is comfortable with and it was unrealistic to think that it could be accomplished in a few meetings. Intimate details needed to be squared away, ceremonies planned, and final resting places picked. So much care went into that re-interment because everyone at the National Park Service was extremely concerned about properly executing the burial. The park service and the tribes were effective in making all parties involved content with the proceedings, and most importantly, the ultimate objective of the project was met and the ancestors were finally laid back to rest.