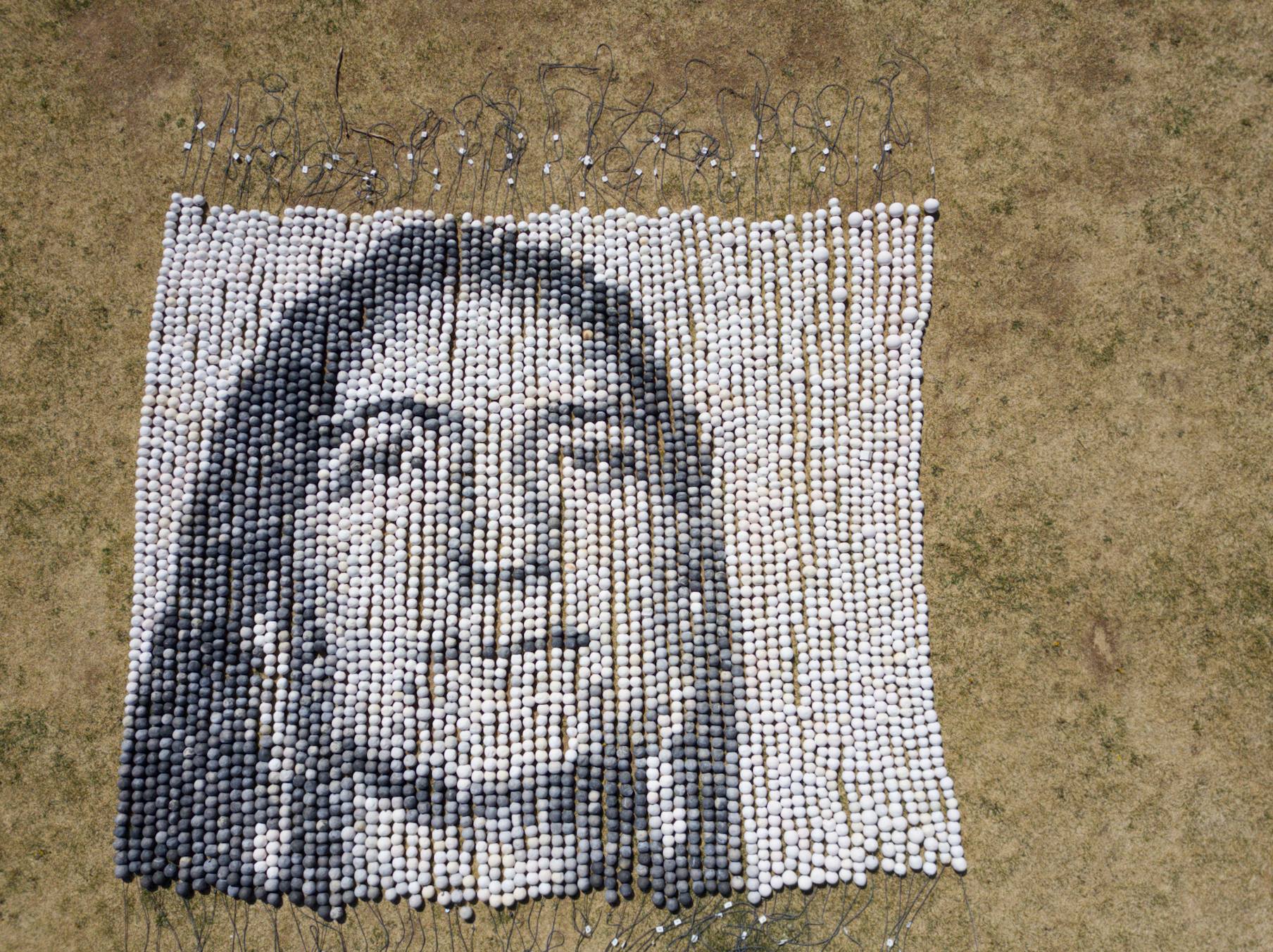 Composed of over 4000 individual handmade clay beads created by hundreds of communities, ‘Every One’ re-humanizes the data of missing and murdered Indigenous women, girls, queer and trans community members. The MMIWQT Bead Project is the first social engagement work of an ongoing series by artist Cannupa Hanska Luger titled ‘Counting Coup’. An instructional video was launched in January 2018 as a call for collaboration with communities from across the U.S. and Canada to create and send two-inch clay beads which were then fired, stained in ink and strung together by Luger to create the monumental sculptural installation.
More about the project: http://www.cannupahanska.com/mmiwqtbeadproject/ Photo: Coursety of Cannupa Hanska Luger

Anchoring the exhibition is Luger’s international social collaboration that culminated in the sculptural installation titled Every One. The American Indian College Fund joined Luger and hundreds of communities and organizations across the United States to Canada to create individual two-inch clay beads. Luger then dyed and strung more than 4,000 beads created in collaboration and composed them to represent the photograph Sister (2016), a portrait of an indigenous woman by First Nations photographer Kali Spitzer.  The work is intended to raise awareness about and honor missing and murdered Indigenous women, girls, queer, and trans-gendered people, with the intention that creating awareness is the first step towards creating policy to address the problem.

Staff members at the American Indian College Fund created clay beads for inclusion in Cannupa Hanska Luger’s sculptural installation Every One, which underpins the exhibition Lazy Stitch, opening Thursday, May 3, from 5-9 p.m. at the Galleries of Contemporary Art at the Entertainment Center for the Arts at the University of Colorado, Colorado Springs.

Cheryl Crazy Bull, President and CEO of the American Indian College Fund, said, “We are inspired by the passion and talent of our artists who bring attention to social justice through their art. The American Indian College Fund’s support of our tribal colleges and universities and scholars and alumni like Cannupa Hanska Luger means greater awareness, especially when we face issues like violence against Indigenous women, girls, queer, and trans people.”

The other four participating artists include Chip Thomas; Jesse Hazelip; Kali Spitzer; and Kathy Elkwoman Whitman, from the Mandan-Hidatsa- Arikara Nation and Norwegian descent, who started her education and training at tribal colleges in the 1970s.

The exhibition, titled “Lazy Stitch,” will open on Thursday, May 3, from 5-9 p.m. A gallery conversation with the artists will take place Friday, May 4 at the Galleries of Contemporary Art at the Entertainment Center for the Arts at the University of Colorado, Colorado Springs. For more information about the exhibit, the installations, and the artists, visit https://www.uccs.edu/~goca/.