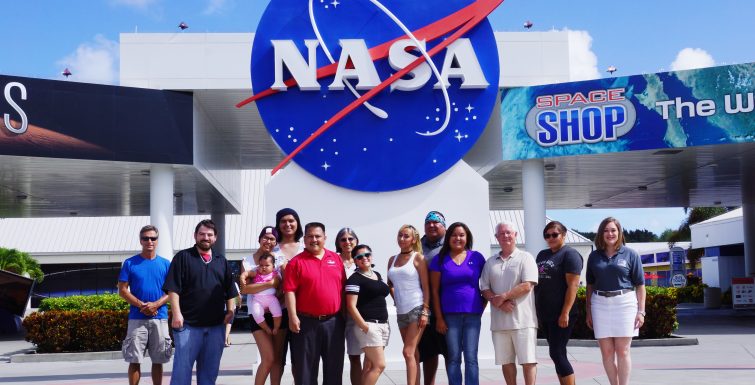 After capturing all of the awards possible at the 2016 First Nations Launch in Wisconsin this year, the Northwest Indian College rocket teams were partially funded to the tune of $6000 for a VIP trip and tour at Kennedy Space Center in Cape Canaveral, Florida.

Eleven of us went and were treated to a spectacular tour. We were escorted through areas that tourists do not normally have access to, such as the command center that controlled the lift-off of the space shuttle and other NASA rockets. We also were presented with a tour of the VAB, (Vehicle Assembly Building), where the rocket pieces are stacked vertically prior to being moved to the launch stand. It was quite a large and impressive building, as you can imagine.

Visiting the Kennedy Space Center Visitor Complex was an event unto itself. We had one day and probably only visited about 25% of it. It’s not only large, but it’s so interesting that hours were spent trying to absorb the many details of the exhibits. We spent a considerable amount of time in the building where the Atlantis, the last-launched space shuttle, is on display. Several of us immersed ourselves in the many simulators, Shuttle Launch, Mars Expedition, and the unforgettable memorial exhibit by NASA and the families of the crews of space shuttle missions STS-51L and STS-107 (Challenger and Columbia), which was very touching and honored these astronauts in a very special way.

Another interesting exhibit was the Saturn V rocket, which took the astronauts to the moon. At the Apollo/Saturn V Center we were able to touch a moon rock and stand under the largest rocket ever flown (363 feet tall and 33 feet in diameter, compared to the Space Shuttle, which is 183 feet tall ready to launch)!

Finally, there was the Atlantic Ocean. We approached it gingerly, expecting Salish water temperatures. Were we ever surprised at the more-than-body temperature of the water! Great fun was had body surfing and staying in the water for hours during the afternoon and evening without getting the slightest bit chilled.

It was a wonderful adventure. It makes one truly appreciate what humans can do! Oh, and we didn’t see any alligators or sharks!