Denver, Colo., April 13, 2022— Congratulations to Jessica Arkeketa (of the Jiwere Nut’achi (Otoe-Missouria) and Muscogee Creek from Tulsa, Oklahoma), an American Indian College Fund Full Circle scholar who is one of 11 students selected to participate in the Udall Foundation’s class of 2022 as a Congressional intern. The foundation selects interns based on academic achievement, leadership, and demonstrated commitment to careers in Tribal public policy. From 1996 through 2021, 295 students from 131 Tribes have participated in the program.

Jessica says the challenges she faced helped mold who she is today. She first started college eight years ago and was successful both academically and served as a youth delegate for the 2015 White House Congress of American Indians conference. But after time, she says she focused more on her social life than academics and began to feel a bit lost. With the support of family, friends, and her own desire for a brighter future, she gave herself a second chance at education. 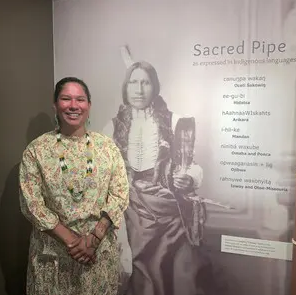 Jessica Arkeketa (of the Jiwere Nut’achi (Otoe-Missouria) and Muscogee Creek from Tulsa, Oklahoma), an American Indian College Fund Full Circle scholar and one of 11 students selected to participate in the Udall Foundation’s class of 2022 as a Congressional intern.

Jessica began work as a Tribal Monitor for her tribe in 2019, which she credits with giving her a sense of deeper meaning. She re-entered college part-time in 2020 at Sisseton Wahpeton College, where she was accepted into the Ancestral Lands Individual Placement Program through the Conservation Legacy and was placed at Pipestone National Monument, where she worked as a park ranger.

Pipestone is a sacred site to many tribal nations and happens to be Jessica’s ancestral homeland. She says, “I found myself spiritually stronger after working at such a sacred site.” In addition to working a demanding job, she continued her education in Native Studies at South Dakota State University. She plans to finish her education there and pursue a leadership career with the National Park Service, using her firsthand experiences along her path to leadership to help others strengthen themselves in mind, body, and spirit, giving them the skills to succeed and build their self-worth and identity.

The Udall Foundation’s Native American Congressional Internship Program, funded and co-managed by NNI, provides Native American and Alaska Native undergraduate, graduate, and law students with the opportunity to gain practical experience with the federal legislative process to understand firsthand the government-to-government relationship between Tribes and the federal government. As a Udall Intern, Jessica will complete an intensive nine-week internship in the summer of 2022 in Washington, D.C.

To read more, visit the Udall Foundation website at https://udall.gov/News/NewsAndEvents.aspx?Item=12184.

Photo: Jessica Arkeketa (of the Jiwere Nut’achi (Otoe-Missouria) and Muscogee Creek from Tulsa, Oklahoma), an American Indian College Fund Full Circle scholar and one of 11 students selected to participate in the Udall Foundation’s class of 2022 as a Congressional intern.