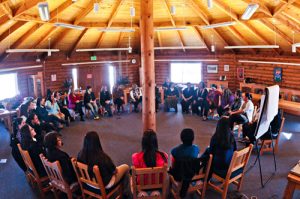 The project provides 20 scholarships and leadership training for American Indian women pursuing their bachelor’s degrees. As part of the leadership training, participants will attend annual retreats to develop skills and gain networking opportunities. Participants will also attend culturally relevant programs to help formulate their personal leadership development plans, which will take root in their Native communities, and evolve as they progress toward employment opportunities, and advanced degree programs.

Twenty women were chosen from six tribal colleges to participate in the program, including: Cankdeska Cikana Community College (North Dakota); College of Menominee Nation (Wisconsin); Fort Belknap College (Montana); Northwest Indian College (Washington); Sitting Bull College (North Dakota); and Southwestern Indian Polytechnic Institute (New Mexico). These colleges were identified because of the strength of their women leaders, for the diversity of the academic programs they offer, and for the regions they represent.

Richard B. Williams, President and CEO of the American Indian College Fund, said, “We congratulate these strong Native women. This investment on the part of the Embrey Family Foundation will give these women the education and skills they need to lead their communities in their chosen professions and as members of their communities. Through this gift of education and personal development, the Embrey Family Foundation is growing the next generation of leaders who will walk in the footsteps of those who came before them, while leading their people and their descendants to a more hopeful and exciting future.”

Scholars chosen for the program include:

About the Embrey Foundation

The Embrey Family Foundation was established by J. Lindsay Embrey, who focused strongly on the importance of education. Embrey’s belief was that education helps people increase their ability to be economically self-sufficient and prosperous.