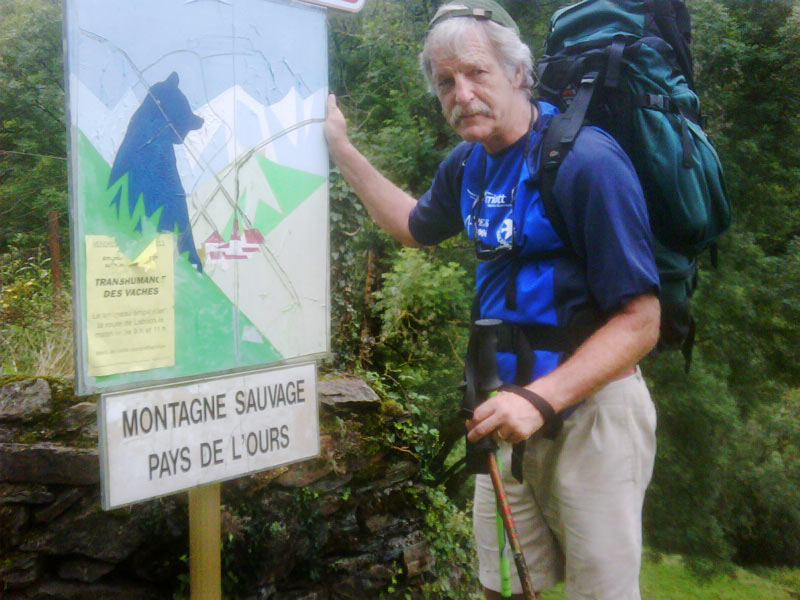 We should have paid more attention the first night in Bagneres to the sight of eight young guys limping down the street, all with leg or ankle braces and the last two wielding crutches. Casualties should have been our thought.

All this while the financial world is deciding to have a second meltdown and my home country is besieged by anarchists. Here in SW France life seems to roll on oblivious of the wider world. I think the folks down here have the more balanced perspective on life.

Six days into Round 2 of our trek, the following topics need addressing:

Distance and Friendship
They say long distances test the worth of a friendship. Well, Glen (Stumpy) decided that he needed to be in a different country from me when pitching his tent. It sounds bad and at first thought and is perhaps a slight overreaction to my snoring, but so be it.

As dawn broke the snuffling and snorting came from HIS tent direction and it revealed 2 things:

Monsieur Patou and his Orthodontics

One can but wonder at the standard of dental health in these parts. Superb is the operative description.

Mr. Patou had a perfect set of polished dentures-beautifully even, no holes or chips and certainly no evidence of braces. The only downside was a certain tendency to over salivate when sighting a foe.

Mr. Patou adorns many warning posters to randonneurs in the Ariege- you are advised not to mess with his troupeau and avoid crossing his path.

Mr Patou is none other than your Pyreneean mountain dog bred specifically to protect his flock of sheep from wolves, bears AND strange humans.

His dentures when viewed at touching distance are quite a sight when fully bared and ready to take a chunk out of you. It’s even more unnerving when he bounces out of the mist with his echoing bark announcing his arrival before you see him.

Hasty avoidance tactics are strongly advised- and there are plenty of these lads around as we discovered several times.

You are wet and fatigued after an eight-hour slog up and down a mountain. You haven’t slept for 48 hours due storms and soakings. You find a lovely village and a fine chambre d’hotes to stay the night. It’s all looking rather fine at last until you discover it’s the night of the village fête.

I detest drum and bass “music” at the best of times, but played outside your window in the street until 4 a.m. followed by a disco till dawn for the young in the back courtyard… enough said!

When Napoleon requested hommes de fer (men of iron) for his Imperial Guard, it was the Ariege department of France that provided the majority of those crack troops.

It’s no surprise when you hike through the plunging valleys and soaring peaks of this area. To eke a living out of Les Montagnes Sauvages (the wild mountains) would have been no easy thing. We hiked through the old mines at 2000+ meters where zinc, tungsten, iron, silver, marble, and talc had been mined by hand over the centuries.

Only some mighty tough folks could make it in this environment. Unlike any other part of the Pyrenees the valley sides are a shade off of vertical, and to cross from one to the other is an awful slog up 1500+ meters and then down the other side, often crossing peaks hitting the 2400 meter mark.

The Ariege hiking guide book says sustainable hiking means limiting oneself to 10 kilometers a day with a full pack and 1000 meters of ascent/descent. It further said you can try 20 kilometers and 1500 meters, but you won’t be able to start the next day.

The guide is for folks in their prime of life.

We had a full pack and had hoped to hit 20 kilometers. The slight problem is my 60-year-old knees, some of which bear the scars of ligament surgery, aren’t designed to handle such terrain or distance.

After two falls on slippery rock slopes and knees at full stress, common sense was applied. Stumpy and I raised the white flag on the Ariege GR 10 after two valleys and diverted north 20 kilometers to some lower slopes that the GR 78 (a pilgrim trail) hits that will take us east to the Cathars path and then back down to the far side of the Ariege to rejoin the GR 10.

This was very disappointing personally, but this is brutal country, and not surprisingly the fastest depopulating area of France. It will soon be left to the bears and wolves to look after. Its magnificent scenery and pure wilderness is such a treat to find. It’s little wonder that few randonneurs pick this section of the GR 10, as it is renowned for being a survival test.

Stay tuned as we try out our diversion route.
You too can be a trailblazer like Trekker Dave by donating today!