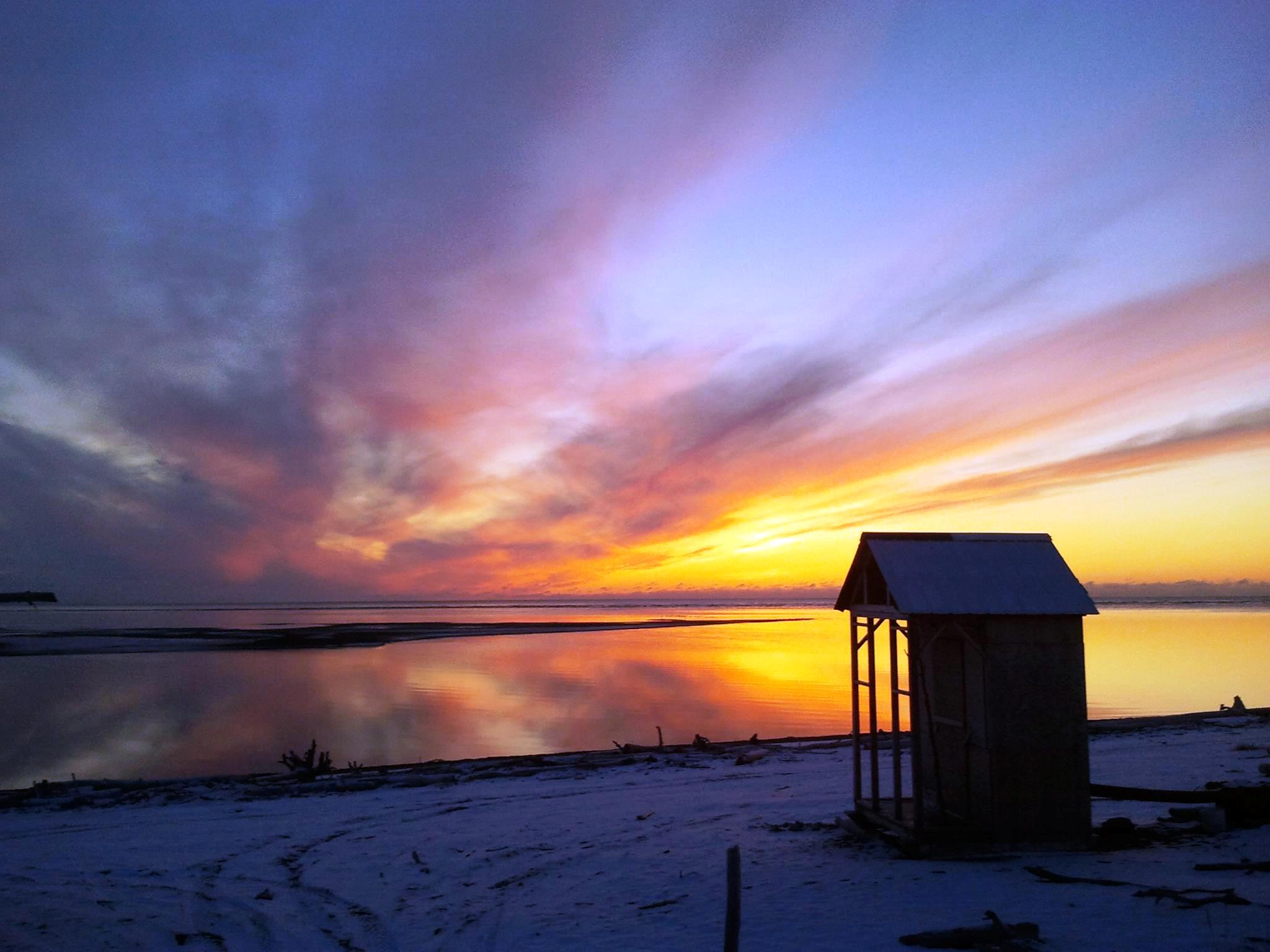 Smokehouse with winter sunset in Unakleet

I remember the cold winters we had in the past, but this winter most likely beat the record low. Temperatures below zero are very common for Alaskan winters. Our winters typically last from mid-October to the end of May. This year we didn’t get our first snowfall until early November, so we thought maybe “Global Warming” was finally taking its toll. Boy, were we wrong! It wasn’t until January that the cold really hit us. It slapped us in the face!

I had just returned to Unalakleet from Anchorage (Alaska’s biggest city). It was mid-January. I was expecting to be welcomed by 20 degree weather-the weather that we had a few days ago, when I took off to Anchorage. I walked off the plane and found my legs to be frozen to the core. They felt like they were being stabbed one hundred times with picks. In just a few days, the temperatures had dropped from 20 degrees above zero to 40 degrees below.

I guess I should have been ecstatic that my car was able to start. It had been parked by the airport since I left. Usually when I leave the car outside in the winter for days at a time, it putts and then the battery dies. I almost wished that I’d stayed in Anchorage for a few more days.

I thought, “This cold spell will pass as quickly as it came on.” It didn’t. Days and weeks passed by and yet the cold weather stuck around. Finally, February brought in one whole week of “warmth.” In other words, the temperature rose to about five degrees above zerp. After that week, the weather was bipolar. If it wasn’t 20 below, there was a snowstorm. The winds blew 50 miles an hour and it was so white out that you could not see 10 feet ahead, behind, or to the side of you.

I live four miles north of Unalakleet and I absolutely hate driving in whiteout conditions. I was driving to school at Ilisagvik College one day in the blizzard, going about five miles per hour so as not to run off the road. I had to slow down a few times along the way. I was so relieved to make it to town without crashing or getting stuck.

Sometimes I wonder how I could love living in a place that gets so cold. I often don’t find the answer to that question until summer rolls around. It is now the middle of June and we still have ocean ice and its 36 degrees Fahrenheit. Just last week, it snowed! Usually by now, we would be taking our boats up North River to go fishing for trout.

This cold weather may have an effect on our normal summer subsistence lifestyle if it does not warm up soon. Last summer we had a lot of rain and very little salmonberries. I noticed my gram was a bit stingier with sharing her berries since there were fewer than normal. Fortunately the blueberries were abundant and made up for our lack of salmonberries.

This summer I plan on picking more berries and harvesting more fish for the cold winter months. Last summer I thought I put away enough fish to last till this summer, but I was all out by spring time.

Our people understand the importance of subsistence because there was a point in time when we had no stores to buy our food and the land was all we had to survive. I still believe that we need to be grateful for what Mother Nature provides us. Subsistence keeps our culture alive and humbles our people. This is why I continue to choose a lifestyle that focuses on our Native values.