University of Colorado Lauds Richard B. Williams for Distinguished Service to Native Community 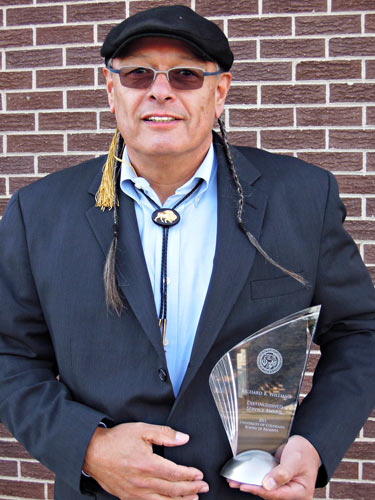 Richard B. Williams, President and CEO of the American Indian College Fund, was given the Distinguished Service Award from the University of Colorado Board of Regents in recognition of his dedicated service to American Indian students and their communities.

Richard B. Williams, President and CEO of the American Indian College Fund, was given the Distinguished Service Award from the University of Colorado Board of Regents in recognition of his dedicated service to American Indian students and their communities.

Richard B. Williams (Oglala Lakota/Northern Cheyenne) is a passionate and committed advocate for the education of American Indians, excelling as a fundraiser, scholar and fierce champion of Native peoples in the United States. Since 1997, he has served as president and CEO of the American Indian College Fund, a national non-profit scholarship fundraising organization for American Indian students attending tribal colleges and universities which provide culturally based education and are run by the tribes.

At NARF, Williams worked on landmark cases concerning the civil rights of American Indians in prison. With the assistance of Wallace Black Elk, a Lakota medicine man, he helped establish the first sweat lodge at a correctional institution. He also developed a plan to build a 50-bed minimum-security prison on the Cheyenne River Reservation in South Dakota, where he served as the first warden.

At the American Indian College Fund, Williams has raised more than $50 million for scholarship support for Native students since 1997, helping 17 faculty members complete their doctorates. He has helped raise more than $45 million in private funds for the accredited Tribal College and University (TCU) campuses to improve campus conditions and $17.5 million for projects to preserve Native intellectual capital. Currently, federal funds for TCU campus improvements total more than $250 million and the TCUs are regarded as an example of how cultural determination fuels educational success. In 2007 Williams received an honorary doctorate of humane letters from Roger Williams University in Rhode Island for his work in Native education. 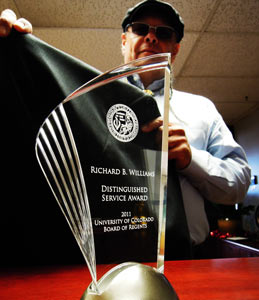 Williams is a devoted father of four children and grandfather of six grandchildren. He resides in Broomfield, Colorado with his wife, Sally Carufel-Williams (Lac du Flambeau Ojibwe/Dakota).