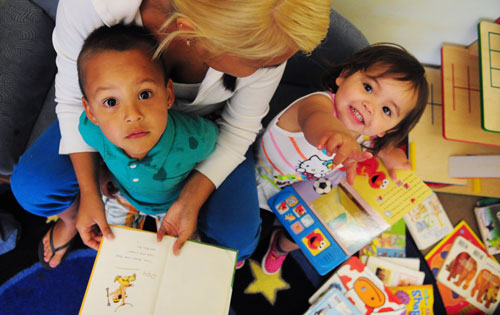 The W.K. Kellogg Foundation (WKKF) announced that the American Indian College Fund (The Fund) is part of a group of 45 innovative organizations from across the country will compete for possible funding of up to $500,000 for one to three years to implement effective family engagement models in early childhood education.

WKKF announced in August 2013 that it would make a $5 million investment to identify and cultivate innovations in the growing field of family engagement that support children’s educational success from birth to 8 years old. The Fund is invested in changing the discourse of Native education, at these early stages of development, from deficit models to strength-based. The movement to strengthen our educational systems from within our Native communities will result in supporting the next generation of healthy, successful, and engaged children.

“WKKF’s Family Engagement Initiative is a historic opportunity for The Fund to support tribal colleges and universities in implementing strength-based programs engaging Native families in the education of their babies, toddlers, and children, at the most critical times of their lives,” said Tarajean Yazzie-Mintz, program officer of the Wakanyeja ‘Sacred Little Ones’ Early Childhood Education Initiative at The Fund. “We have the opportunity to truly implement a diversity of projects that are culturally responsive to different tribal communities – and our Native families are recognized as central players in this movement to improve early childhood learning opportunities. The impact of this work must be systemic and is motivated from within Native families and communities.”

“We hope our investment will advance the field of family engagement by helping the selected organizations to both enhance family leadership development and build organizational capacity to authentically build lasting partnerships among families, schools and communities,” said Carla D. Thompson, vice president – program strategy for WKKF. “But there’s also an incredible opportunity for other philanthropic partners to join us in supporting these and other groups that are looking to share the responsibility of quality family engagement.”

In February 2014, the foundation expects to announce the final award winners.

A complete list of the 45 finalists is provided below:

About the W.K. Kellogg Foundation
The W.K. Kellogg Foundation (WKKF), founded in 1930 as an independent, private foundation by breakfast cereal pioneer, Will Keith Kellogg, is among the largest philanthropic foundations in the United States. Guided by the belief that all children should have an equal opportunity to thrive, WKKF works with communities to help break the cycle of poverty by removing barriers based on race or income that hold back children, so they can realize their full potential in school, work and life. The Kellogg Foundation is based in Battle Creek, Mich., and works throughout the United States and internationally, as well as with sovereign tribes. Special emphasis is paid to priority places where there are high concentrations of poverty and where children face significant barriers to success. WKKF priority places in the U.S. are in Michigan, Mississippi, New Mexico and New Orleans; and internationally, are in Mexico and Haiti.