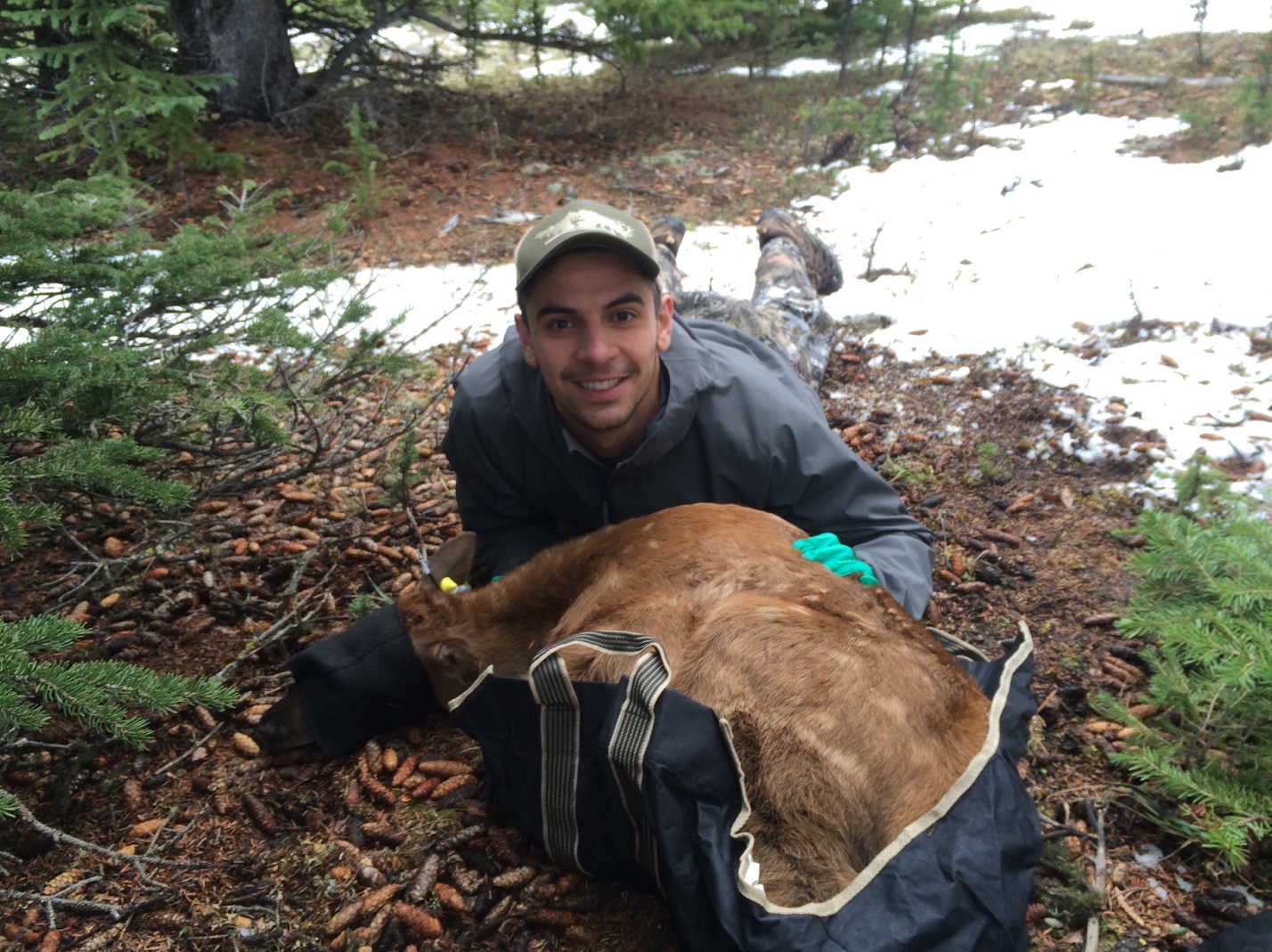 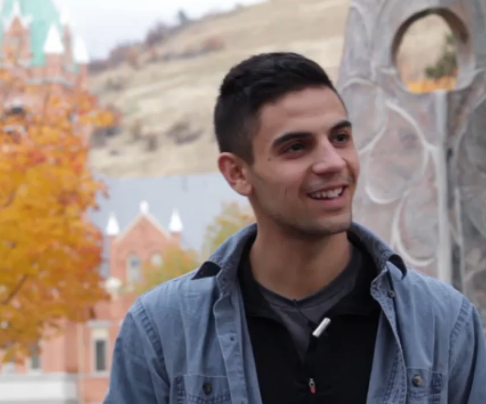 Mateen Hessami, a member of the Wyandotte Nation and a Building Sustainability Pathways 2016-2017 Fellow, is working towards completing his bachelor’s degree while earning practical career experience in a summer research internship.

Mateen’s current body of research began as a summer research opportunity which grew into much more. He is currently working on a project titled: Ya Ha Tinda Remote Camera Project-Estimating Migratory—Resident Elk Populations and Juvenile Recruitment Using Remote Cameras in the Canadian Rockies.

Initially Mateen was set to participate as a technician in the Ya Ha Tinda project. Through the BSP fellowship he was able to initiate his own independent research project. His faculty advisor is Dr. Mark Hebblewhite, Associate Professor for the Wildlife Biology Program, at the University of Montana. Mateen is quick to acknowledge both Dr. Hebblewhite and Ruth Swaney, Native American Natural Resources Program coordinator for the UM College of Forestry and Conservation for their support and guidance.
Mateens’ work involves deploying 28 remote cameras across a 4,000-hectare ranch to estimate migratory resident elk calf recruitment, juvenile survival, and frequency of marked individuals appearing on a remote trail camera. Mateen points out that a significant benefit of using the remote cameras is that they are an inexpensive and non-invasive means of gathering reliable data.

Mateen demonstrates great concern over the spaces where hunters, researchers, and everyday people’s awareness of “the science of our evolving natural world” intersect. His curiosity and passion stem from his youth. As a hunter Mateen became enraptured with the “elusive and incredibly intelligent wild game” he and his family pursued. He grew up cognizant of ungulate (hoofed animal) populations and movements they illustrated throughout the seasons.

Since that time Mateen has taken every opportunity to contribute to the conservation and perpetuation of sustaining healthy ecological systems. He addresses climate change in his work and asks what human beings should consider regarding our actions within a larger ecological context, including “how elk (and other animals) behave and adapt to human driven factors such as hunting, logging, and other fragmentation.”

The following excerpt was taken from a recent update Mateen shared, which illustrates his passion for both the research and the natural world.

“Currently, I am at the Ya Ha Tinda carrying out my winter field season. I have 28 remote cameras to service; in addition I am helping out with the long-term elk project (telemetry-an instrument or device used for measuring distance and/or having the ability to measure and transmit pressure, speed, or temperature from an object to an observer or station, herd classifications, mortalities investigation). Traversing this montane [Editor’s note: a biogeographic landscape dominated by coniferous trees, moist, cool upland slopes and tough growing conditions] landscape is breathtaking and arduous. Sub-Artic temperatures and gale force winds bring wind chill values to dangerous levels. Despite the harsh climate, the scenery is beautiful. Spruce and lodge-pole glimmer with exotic ice formation and 300 elk cling on for survival, shoveling snow for forage while vigilant for predators. I look forward to the next few weeks here; winter in the Canadian Rockies brings out a different element of solitude and peace, something I am always longing for.”

As you can see Mateen recognizes the importance of having a relationship to our natural world and has shown a concern for our ever increasing engagement with technology versus making space to ensure your connection with nature. Mateen pointed out that the BSP funding is unique in its focus on Native and First Nations community considerations, which led him to think more intentionally about how his work might impact or inform other Native or First Nations communities. He referenced the ways in which cameras can be employed by the Stoney Sioux of the Ya Ha Tinda in their management of elk and more specifically bison, which are currently being re-introduced in the area.

Aside from being a full-time student while conducting research in Canada, Mateen is extremely involved in the local community of Missoula. Mateen points out that the BSP funding has enabled him to pursuit of his degree in wildlife biology, and furthermore, the research component has opened doors to establishing networks that have completely transformed his experiences and will continue to do so. 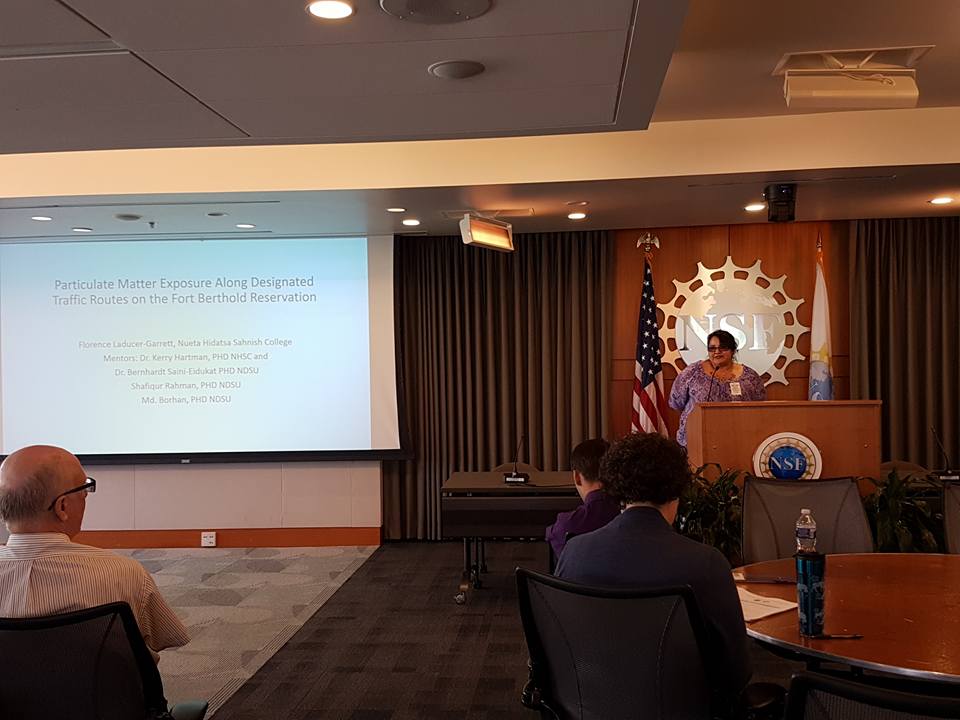 Florence is a Building Sustainability Pathways (BSP) 2015-2017 Fellow and will graduate in May 2017 with a bachelor’s degree in Environmental Science from Nueta Hidatsa Sahnish College (NHSC), located in Newtown, North Dakota. Her research is titled Particulate Matter along Designated Traffic Routes on the Fort Berthold Reservation, North Dakota. Her faculty advisors include Dr. Kerry Hartman, Chair of the Science Department (NHSC), Dr. Bernhardt Saini-Eidukat from the Department of Geosciences at North Dakota State University (NDSU), and Doctors  Shafiqur Rahman, and MD Saidul Borhan, both from the Department of Agricultural and Biosystems Engineering at North Dakota State University.

The Fort Berthold Reservation sits upon the third largest oil reserve in the world. In 2008 an oil boom hit the Fort Berthold Reservation. While there were momentary benefits, there were also long-lasting consequences. Florence says everything in her environment tells her that her love for science can be utilized in her homelands. Through her love for science, for her community, and for her environment, Florence believes she has a purpose.

Her research involves sampling the air, specifically the air surrounding gas flares that exist along heavily trafficked routes. Florence and a research team will show the presence of toxic substances and compound particles with a final goal of quantifying the amount, particle-size distribution, and mineral composition of dust being generated along highly traveled roads, which is one of the impacts of petroleum development in the area.

Florence sees earning her degree and her work as actively contributing to the needs of her community, her tribe, and her peers. She mentions that her tribe is engaged in a process of building their own regulations, codes, and data collection to protect the health of the environment and the people. She recognizes her ability to contribute to these changes.

“Attending Nueta Hidatsa Sahnish College gave me the ability to dream and explore my world, my reservation, and my abilities. Attending the tribal college in my homelands gave me such a larger view of the world and where I belonged in it,” Florence says.

“The legacy of my family is found in the history of a tribal college and it is carried on now as my children attend the same college as me. “

Florence attributes much of her success to attending a tribal college and points out the distinguishing characteristics that sets learning at a tribal college apart. In a story that Florence wrote for her attendance at the American Indian Higher Education Consortium (AIHEC), she elucidated on her growing awareness of her place in the world and the correlation that occurs when an institution recognizes a student’s culture and history and when they are in the presence of other “intelligent and confident Indigenous men and women.”

It is a gift for Florence to recognize and apply these lessons and it is a gift that she finds so many ways to share her experiences and her scientific knowledge with others. She taught a soil-sampling class at the Science Culture Camp sponsored by her college in addition to participating as an Arikara speaker for the NHSC Language Institute.

Florence recently attended the American Indian Higher Education Consortium winter meeting in Washington D.C, was nominated as her TCU’s Student of the Year for 2016, is attending the AIHEC dinner in Rapid City, South Dakota and is her TCU’s student senate treasurer. As an “older student” she states it allows her the space to nurture classmates in many small and often unseen ways. As a BSP Fellow, Florence continues illustrated that she herself is amongst the “intelligent and confident Indigenous men and women” that now inspires and supports the dreams of generations to come.