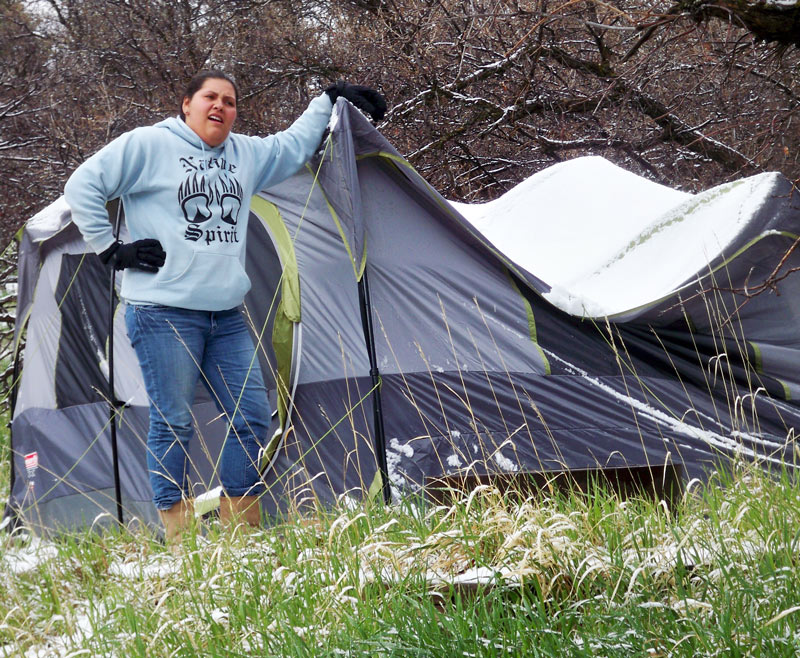 Deanna’s tent could not withstand the May snowfall at her camp at Mesa Verde.

Deanna’s Adventures in Camping on Her Internship

I have never considered myself all that girly or high maintenance, but camping for 10 long weeks seemed like torture on paper.

Prior to my internship, I had never been to Mesa Verde National Park.  To make it worse, the two guys I brought to help me set up my camp were as unfamiliar with the area as I was. Some people at a gas station gave us directions that sent us in the complete opposite direction of the park, and we spent a good three hours in the wrong forest. To add to all of that, we were in a Dodge Caliber, which isn’t equipped for back-country driving.

When we finally figured out we were going the wrong way, one of the tires blew out. In addition, I didn’t think much of the altitude difference from Durango to Mancos, and since it was May already, I was wearing flip flops and shorts. (I’m from California, so please don’t judge me.)  It was also about 30 degrees and the temperature was dropping. When we finally located the park the ranger on duty also gave us wrong directions, telling us that the campground was about 4 miles in and to keep to the left.  Because he mentioned going to the left we completely passed the campground, even with all the signage present, instead driving all the way up to the museum, which is about 16 miles away from the camping area on an extremely winding and narrow road on the spare donut tire. We happened to take a dirt road because it veered to the left. After a bit of off-roading, I realized we were wrong again because were at the sewage treatment site.  When we finally reached the camp site, I had my two friends set up the entire camp while I warmly sat in the car.

SNOW, SNOW, SNOW!!!!! The first month of camping was spent in freezing conditions.  The weather was unpredictable and extreme.  I was equipped with a zero degree sleeping bag, fleece blanket, wool Pendleton blanket, and a little propane heater.  I don’t think I was supposed to be using that thing inside of my tent but I ignored the propane smell. It was too darn cold!  I was also dumb enough to buy a larger tent because the thought of staying in one of those small tents for so long made me a bit claustrophobic, so being cold was a bit of my fault, too, because your body heat cannot heat a large tent.

Getting ready in the morning was the biggest challenge. After taking all night to get warm and cozy I had to wake up at 5:30 in the morning when it’s the crispest cold.  I actually tried to get dressed without leaving my sleeping bag a few times. I don’t recommend trying that in a mummy bag, especially when you’re pressed for time.

To make things even more uncomfortable, because of the cold conditions, the park had only one bathroom facility operational because they didn’t want the pipes to freeze.  I just HAD to put my tent in a secluded spot at the opposite end of the loop.  For the same pipe-freezing reason and also because the campground hadn’t officially opened to the public yet, the showers available at the campground weren’t running yet, either.  If it weren’t for the concerns of my gracious mentor, none of the interns would’ve showered.  She took it upon herself to make sure that necessity was met even to the point of extending her home to us.

On a happier note, because the weather conditions became so intense, the coordinator of our internship arranged it so we could stay inside one of the empty houses located at our campsite on the really bad nights.

Adventures in camping: To be continued. 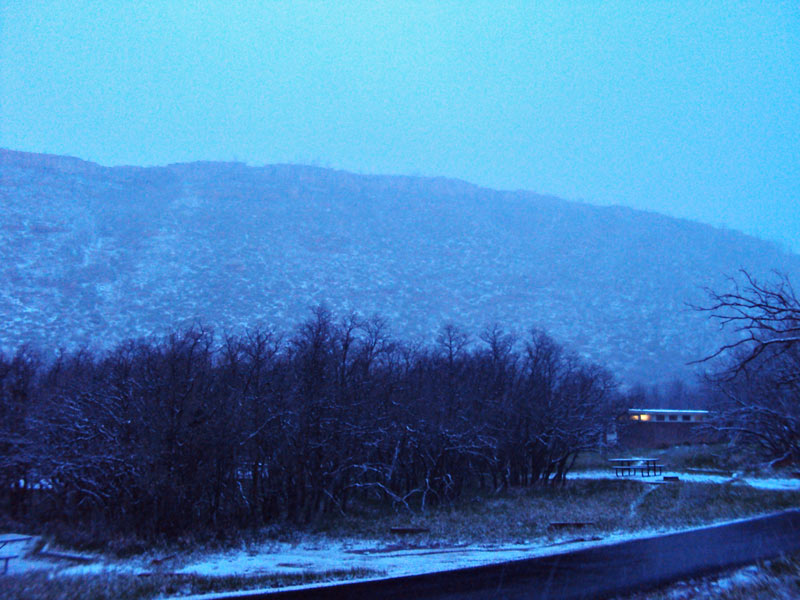