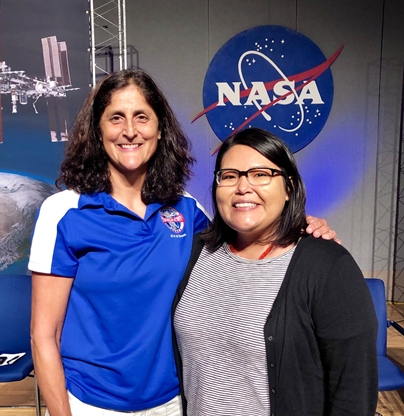 As the country celebrated the 50th anniversary of humankind’s first visit to the moon, American Indian College Fund Student Ambassador and Scholar, Nylana Murphy, was working on the next generation of spaceflight hardware and connecting her community to the history of Navajo technology and creation.

This summer, Murphy interned with NASA managers at the Lyndon B. Johnson Space Center in Houston, Texas. She worked alongside numerous talented mechanical and aerospace engineers – learning the fundamentals of testing for the Portable Life Support System (PLSS), which provides livable atmosphere for an astronaut inside their space suit during excursions on the lunar surface, and in space. “The experience that I gained from my internship here is simply amazing,” said Murphy. “I never would’ve seen myself learning and working alongside engineers and their hardware.” During her internship, she also visited NASA’s Mission Control, the Lunar Lab, and the Neutral Buoyancy Laboratory – or weightless astronaut training pool.

In addition to celebrating the 50th anniversary of the Apollo 11 lunar mission at the Space Center, Murphy also met astronaut Suni Williams, the ninth woman to walk in space. She shared that “This internship has allowed me to see another perspective on the type of career that I may want to pursue after I graduate … I was inspired by Aaron Yazzie and Seth Begay (both Dine’, Navajo Nation), whose work at NASA opened by eyes to greater possibilities and further motivated me to achieve my goals.”

Murphy’s work didn’t stop at the Space Center. She also helped bring the 2019 Dine Nation Maker Faire to her school, Navajo Technical University. Spawned from a similar exhibit at the 72nd Navajo Nation Fair, the Maker Faire is divided into four sections according to the four worlds the Diné people passed through to arrive in modern times. The black world relates to the basic forms of survival making, such as weaving and metalwork. The blue world represents trade and engineering skills related to the wage economy, such as trades like welding, carpentry, and fabrication. The yellow world features revitalization of identity and culture, from Indigenous cooking to modern storytelling. And the white or “glittering” world features new innovations in 3D printers, solar cars, and meteorology equipment.

She interviewed many of the Faire participants and hosted a video review of the event that was recently posted to YouTube.

Murphy wants to influence more young Native students to take their own exploratory steps into the world of STEM and show them that they are capable of being an astronaut, engineer, or a flight manger. “There’s a career for everyone, where their dreams can become reality,” Murphy shared. With a focus on education, and the help of other technologically inquisitive Native students, those dreams WILL become a reality.