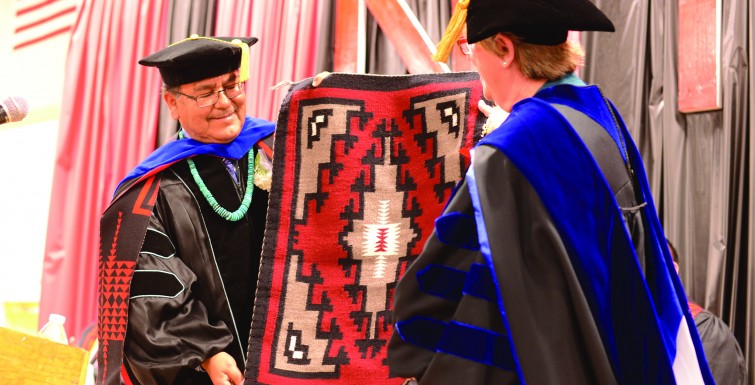 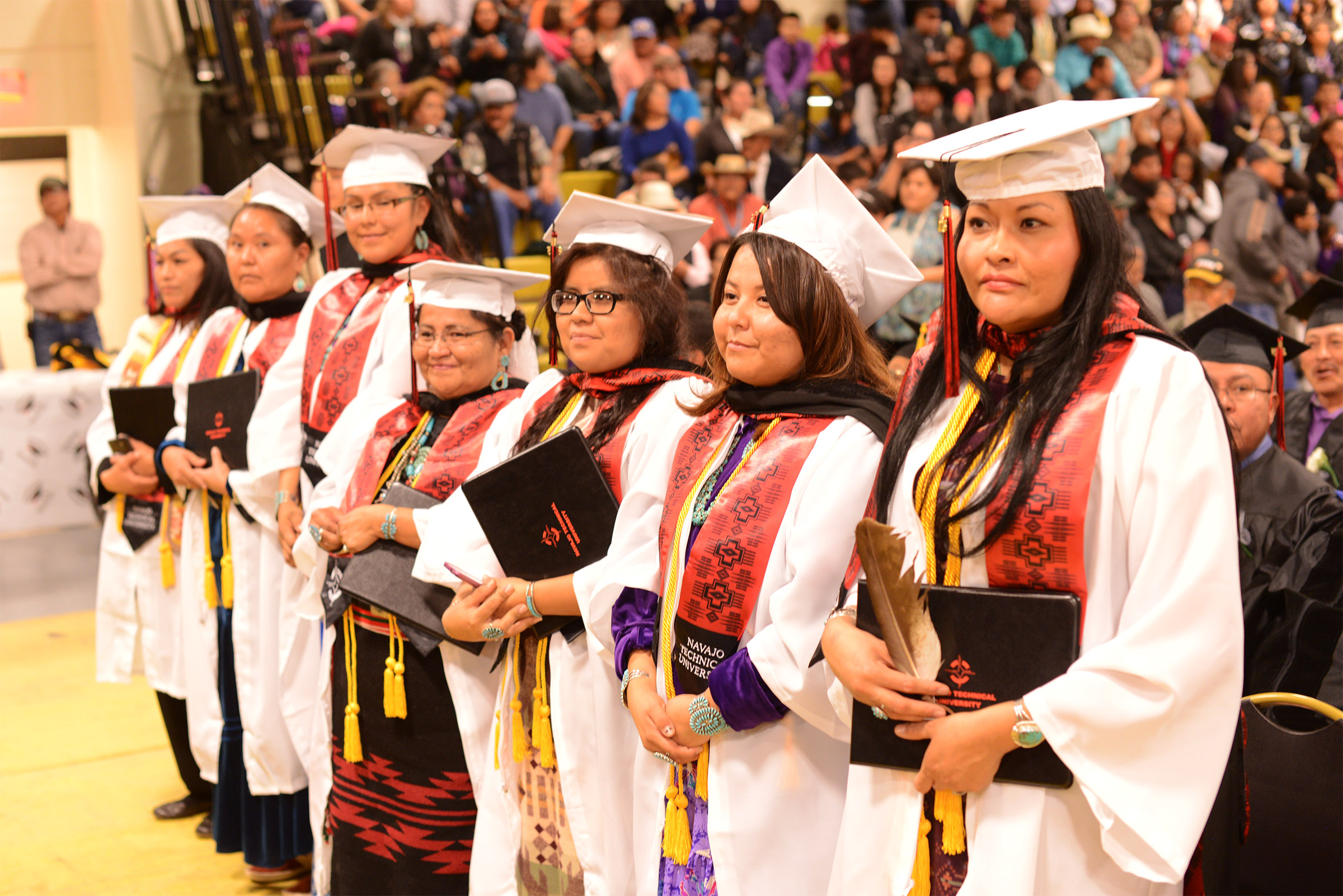 On Friday, December 11th, Navajo Technical University provided a glimpse into the future by conferring its first baccalaureate degree in Industrial Engineering and first six baccalaureate degrees in Early Childhood Multicultural Education. Since NTU became a university in 2013, it has focused its attention on building programs that will help serve a national need for careers in Science, Technology, Engineering and Mathematics (STEM).

One of the first programs the university developed to serve this interest was a Bachelor of Science degree in Industrial Engineering – which this past Friday produced its first graduate when Fayetta Clawson of Farmington, NM received her degree. “It seems like this was a dream a few years ago,” stated NTU President Dr. Elmer J. Guy, who has issued 26 baccalaureate degrees across five different STEM programs since NTU became a university. “What’s exciting is there’s more in the pipeline.”

For Clawson, being the first student to graduate from NTU’s Industrial Engineering program was a fulfilling accomplishment that took a lot of sacrifice and didn’t come easy. “At times I felt like giving up, but I had to keep pushing myself to keep going,” explained Clawson. “Sometimes I’d think to myself, ‘Why am I doing this? I’m not good enough.’“

“But everyone at school told me I could do it and my family told me to never give up. I’m just glad it’s over and thankful to everyone who helped me along the way,” Clawson continued. 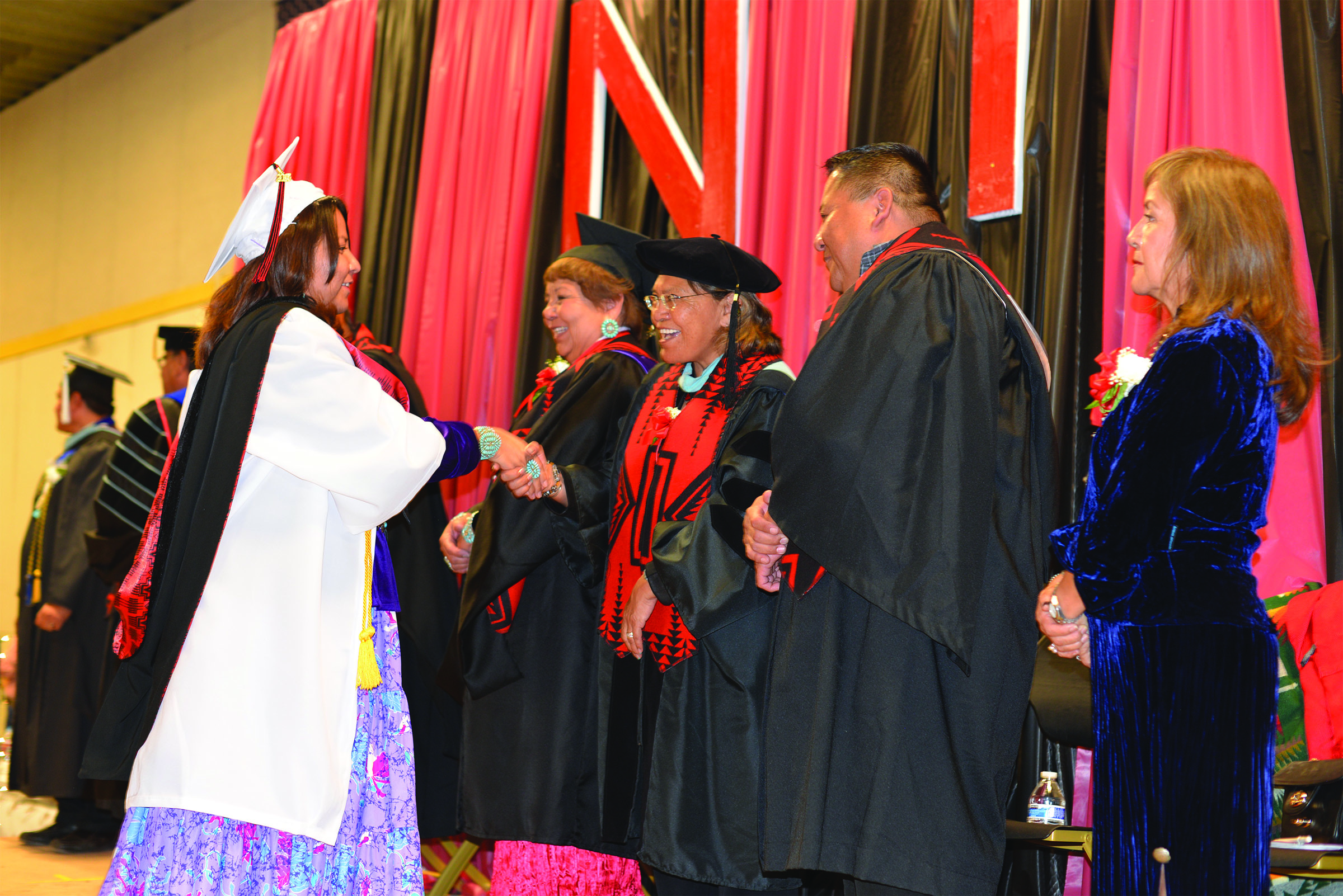 Graduate Ramara Begay shakes hands with NTU’s Board of Regents and Navajo Nation Poet Laureate Dr. Laura Tohe at NTU’s fall commencement. Begay was one of six students to receive a Bachelor of Science degree in Early Childhood Multicultural Education.

While Darwin obtained her degree in Crownpoint where the Bachelor of Science degree program is housed, the other five students attended NTU’s Chinle instructional site and commuted to Crownpoint for an entire semester in order to take core courses only offered at NTU’s main site. Since NTU’s instructional site in Chinle doesn’t currently have the infrastructure needed to fully support the academic needs of a bachelor degree-level program as recognized under the HLC, the five made the 130-mile commute each day in order to stay on track for graduating.

“We all had to collaborate and rise together to get it done,” said Vernita VanWinkle-Sorrell, who explained how the five would car pool each day leaving Chinle around 4:00 am and not returning home until 7:00 pm. “I just feel really overwhelmed right now. We had to work so hard to come so far.”

Graduate Ramara Begay agreed with VanWinkle-Sorrell’s sentiment about graduating, but she was further thrilled about earning her degree from a higher education institution of the Navajo Nation. “It’s special because it’s here at home,” said Begay. “You’re not elsewhere getting your education. You’re here learning from your own people.”

Of all the graduates in attendance, the early childhood educators had the largest cheering section, which consisted of first and second graders from Chinle Elementary – who were in attendance to support their student teachers that were graduating. The children made them selves known during the opening ceremony while reciting the Pledge of Allegiance. While the entire Chinle Community Center fell silent after stating the pledge in English, the elementary school children ventured into an extended rendition in the Navajo language. The endearing moment was one that resonated amongst all in attendance, including President Guy.

“That was a really cool moment,” exclaimed Dr. Guy as he lamented on the day. “It was great to see because that’s where our students will be going to teach. It was a good glimpse into the future.”