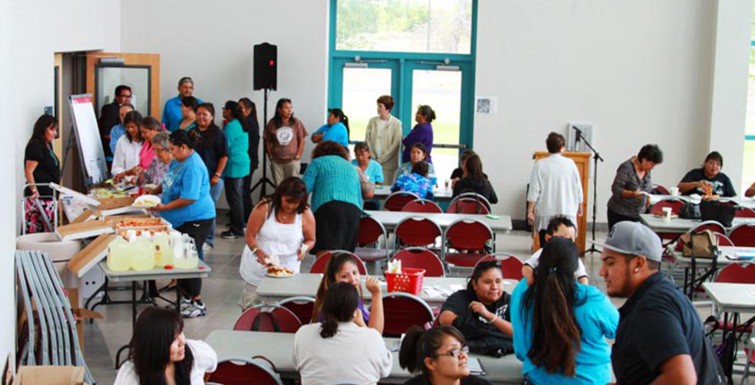 The Kick-Off was envisioned by Project Director and Coordinator of the Early Childhood Program, Danielle Lansing, Ed.D., to launch a “new era in early childhood education at SIPI.”  Southwestern Indian Polytechnic Institute has provided professional development and service to numerous Head Start centers across the pueblo and other Native communities in New Mexico and Northeastern Arizona. This includes a partnership with YDI Head Start for practicum placement of pre-service teachers; transformation of the YDI curriculum for young children that engages Native culture and language; a new special topics course focused on indigenizing early childhood educational thought; parental partnerships to engage them in their child’s cognitive development; and curriculum development, implementation and assessment.

Project Director Lansing states, “parents can help teachers identify what parts of culture can be a part of curriculum.”  Innovation in curriculum design draws information from parents using Photovoice (a research methodology which is built upon participatory inquiry) to capture visual concepts of Native culture and knowledge.

Parents have a valued voice in SIPI’s work to revitalize and strengthen their early childhood education program. Within Native communities, parents are often left out of curriculum development and educational design; the innovative approach at SIPI is a starting point for processes which may address the historic disconnections between Native families and educational institutions.

SIPI President Dr. Sherry Allison opened the Kick-Off, saying, “We are where we should be…we need to always remember the investment in our children.” Dr. Allison recalled a recent family celebration commemorating a great–grandchild’s first laugh.  The story served as an example that Native people have “beautiful ways of welcoming babies into the world” and with that come lessons shared with the child about topics such as generosity, responsibility, and relationships.  President Allison’s story placed front and center the notion that Native communities, parents, and elders can inform theories about young Native children and the milestones by which we measure child development and readiness for engaging the world.

The YDI Head Start Director Anna Marie Garcia shared news of SIPI’s grant partner center, YDI Head Start, receiving acknowledgement of their National Association for the Education of Young Children (NAEYC) accreditation.  This accreditation is a rigorous process and, when earned, signals quality early childhood education (to learn more about NAEYC accreditation see: http://www.naeyc.org/academy/interested/whyaccreditation). A National Head Start Center of Excellence, the program opened its doors in 2009 on SIPI’s campus. Approximately 70% of its current teachers are either SIPI graduates or are students currently enrolled in the SIPI Early Childhood Program. The center serves approximately 85% American Indian children, and the other proportion of the children is from diverse racial, linguistic, and cultural backgrounds represented in the Albuquerque area.  The “Sacred Little Ones” grant initiative at SIPI has solidified a new thread of the partnership between YDI and SIPI: to develop quality teacher education practicum experiences for Native pre-service teachers serving tribal nations located in New Mexico and Northeastern Arizona.

The launch celebrated an alumna of the Early Childhood Program, Verna Calabaza, and the power and lasting impact a SIPI education had on her as successful Native educator. Calabaza, a SIPI graduate, has worked as an early childhood teacher in her community for nearly13 years. She draws strength from her experience as a mother, an Army veteran, and program volunteer. Calabaza, who will soon earn her master’s degree, said, “I encourage [SIPI] students to continue on the road you’re on…. It takes special people to have those qualities of a strong early childhood teacher.” Calabaza paid special tribute to SIPI early childhood faculty member, Gail Goldstein, saying, “You’re the reason I am up here.”

After a pizza dinner, the new special topics course had its first meeting. Project Director Danielle Lansing stated, “There are only 22 spots in the course. We have over 46 individuals who want to take the course!”  The course will engage students in a guided inquiry and process for theorizing and developing indigenized early childhood education. There is great interest in collaborative intellectual inquiry focused on early childhood theory, curriculum, and assessment. The special topics course would not have been created without the support of the Wakanyeja grant. Before, SIPI early childhood program courses were primarily offered by adjunct faculty. Dr. Lansing is the first full-time early childhood education faculty with a doctorate in education to lead the way to strengthening the program.

The Kick-Off event sought to showcase the culturally based learning opportunities for Native children. The Wakanyeja “Sacred Little Ones” grant initiative is credited with bringing back to the forefront educational discussions that place Native knowledge, culture, and language back in the center of the work with young children and the teachers preparing to serve Native communities and families.