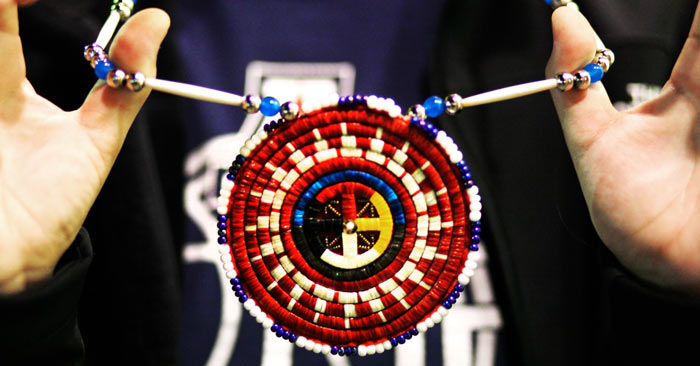 Growing up on the Rosebud Sioux Indian Reservation in south central South Dakota was a real experience. I have seen things that people only get to imagine as they read a book. Heck, some people in this country do not even know where South Dakota is.

The beauty of my homeland and the rich history of my culture always held me tightly close to the area. As a child growing up I thought I had it rough, I thought for sure I was the only one in the whole world who was living without electricity or who had to eat commodities. Little did I know I was one of the many who has thus far survived the reservation experience. I am proud of the hard road I have traveled to get to the good life: a life that isn’t filled with money or extravagant objects, one in which allows me to know who I am and where I come from and enables me to make the most of the present and the legacy I will leave behind.

I grew up in a rather large household. My family was comprised of my mother, her mother, and about six to eight other cousin/brothers and sisters whom my grandma and mother took care of, as well as me. We lived in a two-story housing house in a little village called Horse Creek. It was told to me that it was a great place to water your horses and camp back in the days when we were still a free people. The area was often visited by our hero Tasunke Witko or Crazy Horse.

I am fortunate enough to have been raised in a house that spoke Lakota all day and every day. I also had extended family, all of whom were very knowledgeable in not only our Lakota ways, but in our history. They were a family of story tellers and of elders who still tried to maintain their old way of life. The treaties that so many of our people signed with the U.S. government were also a topic of discussion in our family. I believe it is this way of life that has carried me so well into the future.

The stories that my grandmother and grandfathers told me were not the same the stories that I read in the history books at school. The stories in the books said my grandmothers were blood-thirsty savages, not the sweet old ladies who taught me songs and stories and my beautiful language so we could converse and communicate. This is one of the major reasons that I chose cultural resources management (CRM) as my major. I could not bear to read something else inaccurate. CRM ties me into a bigger picture that preserves and maintains ties that will keep us going.

There have been many anthropologists who went to numerous Indian reservations, stayed for a short period of time, then went home to write volumes on their perception of the people, but they were merely outsiders. Their studies usually aren’t very useful and are often untrue.

My choice to work in the anthropology/archaeology field was an important decision. As an “insider” I can get access to have more stories told and I believe that by knowing our language, history, and culture, and being a child who grew up with family who respected and honored one another and the treaties that our ancestors signed to make sure we as the seventh generation could be properly taken care of, I can preserve and protect what our ancestors fought for. They did not shed blood and sweat and tears for us to just ignore.

As long as we have languages and traditions and culture, we are the true inhabitants of the lands we walk on. The longevity of the Native nations who depend on us as young and educated Natives to keep the fight going is looking quite promising. I am confident that we will all make our ancestors proud and they will dance for us in the stars.

The Natives of this land now have the advantage of an education. Before we were only taught skills to help us work for other people. Now we are in a position to make moves for our respective Nations and for our families. The day has come and we need to stand up just as our ancestors did before us. Let us proclaim the land as ours once again and bring ourselves back into the ball court as a fierce competitor driven by the souls and spirits of those who fought and died while trying to protect us.

I would like to remind my peers to learn your language, pay attention to your elders, and study your treaties.  Knowledge is valuable and powerful, just as we are.

Dera is a senior cultural resource management major at Sinte Gleska University from Swift Bear, SD. She plans to further her higher education with a masters and PhD to support her work in the anthropology field.  With a focus on cultural preservation, Native languages and gaining knowledge on treaties, she believes this will give back not only to her people on Sicangu lands, but to all Native America.