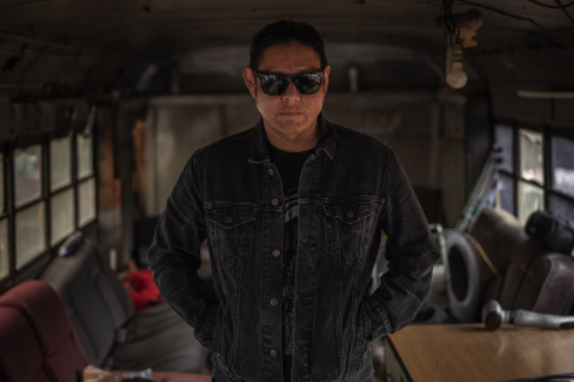 Diné film and TV director Blackhorse Lowe met with the College Fund to speak about what it means to be an Indigenous director. Lowe grew up on the Navajo Nation hearing traditional and family stories and watching movies–lots of movies, which influenced his path on becoming a film and TV director.

Reservation Dogs is perhaps the first Indigenous TV show that portrays Native people in a contemporary context. Shot on location on the Muscogee Nation in Oklahoma, the show shatters the romanticization of the Native American, challenges religious beliefs, illustrates the ennui of rez life, and brings to light the issue of suicide among our Indigenous teens.

The premise of the show centers around four Indigenous teens: Bear (D’Pharaoh Woon-A-Tai), Willie Jack (Paulina Alexis), Elora (Kawennáhere Devery Jacobs), and Cheese (Lane Factor), who thieve to make money to escape the rez in hopes for greener grass in California, all while honoring the memory of their belated friend, Daniel, who committed suicide. As our beloved teens walk the streets of their rez neighborhoods, we meet all sorts of characters who make the Indigenous community rich, fun, while making reservation life more and more difficult to leave.

Reservation Dogs includes an all-Indigenous cast, as well as Indigenous producers, writers, and directors–leading us back to Blackhorse Lowe.

Lowe directed Season 1 Episode 3: Uncle Brownie and Season 1 Episode 5: Come and Get Your Love. Uncle Brownie introduces Gary Farmer (as Uncle Brownie), who the teens seek out to teach Bear to fisticuff bullies. Come and Get Your Love traces the origins of how young Big became a tribal cop (Zahn McClarnon) by way of encountering Deer Woman, a Native American being prominent in folklore, whose ominous presence inhabits the reservation. By being a good boy and becoming a good man, Big is spared Deer Woman’s vengeance and eventually her presence.

Blackhorse Lowe’s presence was palpable through the laptop screen–funny, approachable, and down-to-earth as he openly shared his experiences as an Indigenous director, from overcoming barriers to securing funding for projects to promoting his work. He says his challenges have been steppingstones and learning opportunities, moving him towards attaining the concrete outcome of his vision as a filmmaker. He said although it may be at times be a lonely endeavor as an artist to see a project through to the finish line, support from friends like our very own Kelley Mitchell, (Diné, American Indian College Fund Full Circle Program Coordinator in the Student Success Services team), fellow director and writer Sterlin Harjo (Muscogee and a citizen of the Seminole Nation of Oklahoma), and fellow writer Taika Waititi (Māori and Jewish decent) help to make the vision a reality. And reality is what the show does best!

As our time with Blackhorse Lowe came to an end, more questions about his work bubbled up from the College Fund team. Blackhorse Lowe shared his passion projects of Indigenous storytelling using genres like horror and sci-fi, and his tireless work with Native youth to help them realize their goals.

The conversation with director Blackhorse Lowe demonstrated that although the work of an artist is solitary, one never knows how many people one may touch through their art. You just might save a life by being an inspiration, most especially for underrepresented Indigenous people. It’s a weighted responsibility, but one that we as Indigenous people share with our ancestors.

At the time of this blog’s publication, the second season of Reservation Dogs was being filmed. You can watch Season 1 on Hulu.