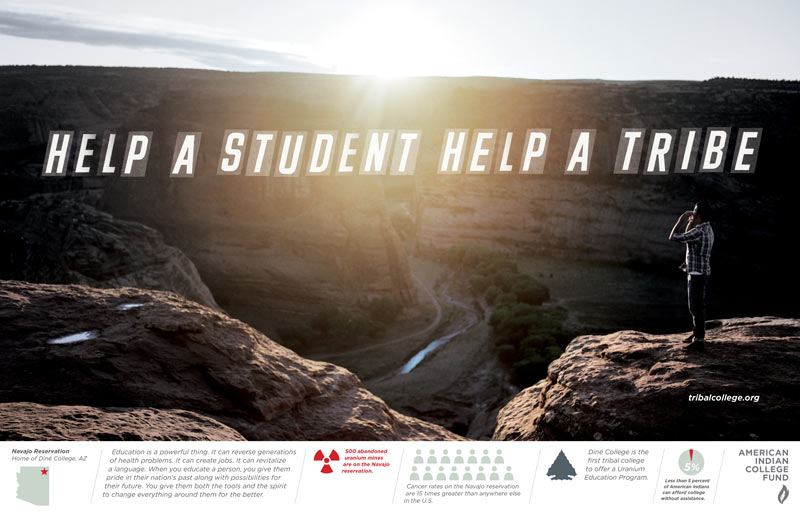 The series of stunning PSAs was filmed on location at three sites across Indian Country, including the Navajo reservation in Arizona, the Pine Ridge Reservation in South Dakota, and the Lummi reservation in Washington state. Thirteen print advertisements depict the reservation communities and American Indian students attending tribal colleges who are pursuing a college education, giving them a better future while also helping to create a more positive future for their communities by addressing health care, environmental, educational, and cultural preservation issues. The renowned German photographer Anne Menke produced the stunning photography. In addition, a 15-, 30-, and 60-second video version of the PSA was filmed on-location, featuring the work of award-winning television advertising producer Joe Pytka.

The American Indian College Fund has enjoyed a 21-year relationship with Wieden+Kennedy to create public service announcement advertisements that educate the public about the Fund and the students, tribal colleges, and Native communities it serves. Wieden+Kennedy is known for its signature work for Nike and was named Adweek’s 2008 Global Agency of the Year.

Over the years, the distinguished body of work Wieden+Kennedy has created for the Fund has appeared in such publications as The New York Times Magazine, Harper’s, and Fortune, and has run on television networks such as Discovery Networks and National Geographic.