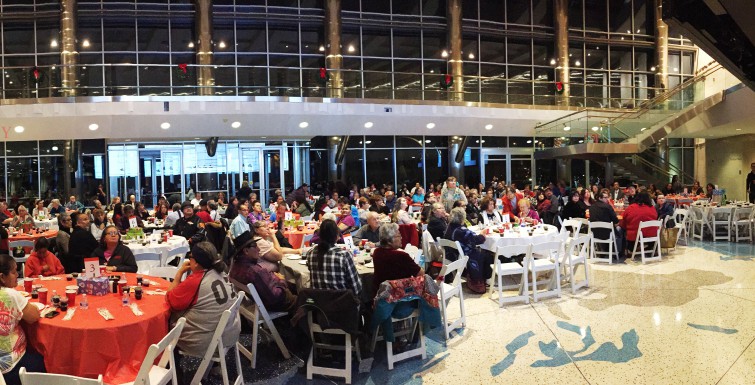 Christmas came early for close to 300 American Indian elders from the Denver Native community. On December 2, Natives ages 55 and older gathered at the Cable Center at the University of Denver to enjoy a holiday meal of buffalo and gifts bestowed by a Native Santa Claus, courtesy of the American Indian College Fund.

Volunteers from the Denver community served steaming platters of food while the Mile High Singers drum group provided entertainment. Cordell KillsCrow served as the emcee for the evening.

Two American Indian elders were named as the College Fund’s annual Elders of the Year. This year Margaret Ann Yankton Tranekier (Oglala Lakota) and Kenneth G. Little (Hunkpapa Dakota) were honored for their guidance and leadership in the Native community.

Margaret (Oglala Lakota) is the daughter of Cecelia Yankton and Richard LoneDog and granddaughter of Noah and Margaret (Maggie) Yankton of Wounded Knee and Manderson, South Dakota. Her Lakota name is Heska Win, meaning White Mountain Woman. The name was given to her by her grandfather because she was born in Denver near the Rocky Mountains.  Margaret’s grandparents instilled in her a deep pride in being Lakota and taught her the virtues and traditions of her people and the value of helping others.

Margaret was raised in two worlds: the city of Denver and the Pine Ridge Indian Reservation.

In 1959 the Chamber of Commerce and the White Buffalo Council organized a Miss Indian Colorado Pageant during the State of Colorado’s Centennial Year Celebration.  Margaret and two other finalists from the Southern Ute Tribe competed. She won the title as the first Miss Indian Colorado at age 16.

Margaret finished junior high school at Our Lady of Lourdes School in Porcupine, South Dakota and attended high school at Holy Rosary Mission (now Red Cloud Indian School) in Pine Ridge, South Dakota, where she graduated in 1962. After graduation she moved to Indiana for eight years and worked in the banking industry. After returning to Denver she reconnected with the community and the Denver Indian Center and began helping with various community events and powwows. She also got involved with the Indian church and started attending mass and reconnected with several elders from her childhood. In 1997 Father John O’Connell appointed her as Director of Religious Education for the Kateri Catholic Community.

Margaret also attended Metropolitan State College, Certified Nursing Assistant training at St. Luke’s Hospital, and completed a four-year Biblical studies program with the Program of Foundations of Biblical Ministry. She worked as a certified nursing assistant until her retirement in 2013. Caring for the elderly and ill was a fulfilling career for her.

Three highlights in Margaret’s life include sharing her life with her husband Alan Tranekier until his death in 2004; the privilege of being asked to represent the community at the Canonization of the Blessed Kateri Tekakwitha in Rome, Italy; and last but not least, seeing all of her takojas (grandchildren) born and supporting them in their sports and school activities and watching them dance at powwows.  Family is everything to her.

Margaret is a member of the St. Kateri Catholic Community where she continues working part-time as the Director of Religious Education. She carries on the legacy of her grandparents as she continues to lend a hand any way she can by volunteering, cooking,  and helping to locate assistance for many families in need in the Indian community.

Kenneth is from the Standing Rock Sioux Reservation in Ft. Yates, North Dakota. His Dakota name is Heyoka Sica, which means “Jumping Clown” and was given to him by his grandmother while he was still in the womb.

Kenny has two sons, Ken and John Little, who reside in Kansas City, Missouri and Vermillion, South Dakota, respectively.  He moved to Denver in 1964 to after he graduated with a bachelor’s degree in education because he heard that the Denver Indian community was diverse and culturally connected and offered many professional opportunities.

Kenny has been a well-known powwow singer since he was very young, and after moving to Denver in 1964, he formed the first “Denver Singers” drum group. His drum group name is the “Black Tongue Dakota Singers.” Kenny enjoys singing and sets up at every Denver community powwow and provides educational presentations at many Denver metro area K-12 public schools.

Kenny served in the United States Army from October 1966 through October 1968, and began working as a substitute teacher and as a bus driver for the Denver Indian Center in the early to mid-1970s.

In the early 1980s Kenny relocated to North Dakota to pursue a master’s degree in education at the University of North Dakota.  He graduated in 1984 and began working as the Indian Education counselor for the Grand Forks public schools which he says was one of the most fulfilling jobs he has had. After serving in that role for five years, he and his family decided to relocate back to Denver to work for the Intertribal Heritage Program. Through this work he was able to build many relationships with Denver Public Schools, and he found a position as a fifth grade teacher.  In all, Kenny has taught for 18 years in K-12 and as of today, he works as the Lakota language teacher at the Denver Center for International Studies, a 6-12th grade magnet school.

Kenny recently participated in the November 2Washington Redskins protest in Minneapolis, Minnesota, where he was able to support more than 5,000 other Natives in the fight to change the Washington team name.  He maintains cultural connections to the Standing Rock Sioux reservation by going back every summer to participate in ceremonies and to attend a three-week Lakota language course at Sitting Bull College.  Kenny is a fluent Lakota/Dakota speaker, but feels that attending the Lakota language class helps him teach the language better for his students at DCIS.