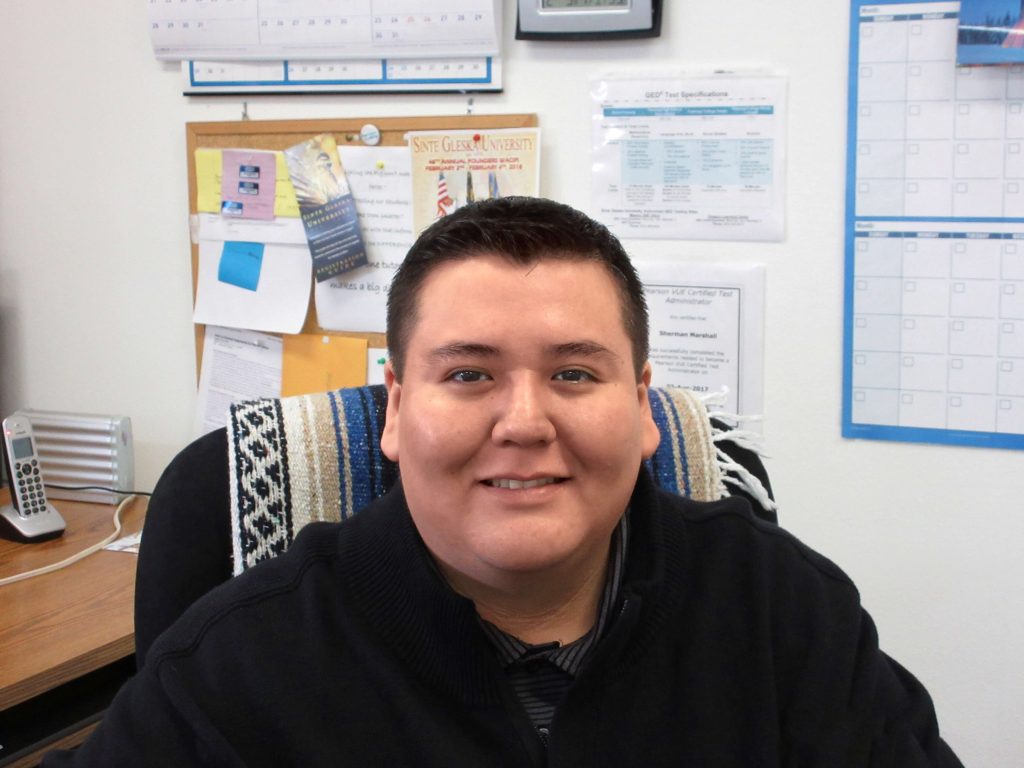 Over its 50-year history, the Adult Basic Education (ABE) Department at Sinte Gleska University (SGU) has been fortunate to have a dedicated staff. Our director, Sherman “Jim” Marshall, II, has led this important work for nearly 15 years.

While Jim started his tenure as director of the ABE department in 2008, his family’s connection to SGU dates back to the early days when SGU was a college. Jim’s father, Sherman Marshall, Sr. was the first graduate from Sinte Gleska College to receive a bachelor’s degree in human services in 1980. Sherman Sr. began law school at the University of South Dakota (USD) in 1981 and graduated in 1984; he then returned to SGU as vice president until his appointment as Chief Judge of the Rosebud Sioux Tribal Court in 1986.

As a senior in high school, Jim took speech communications and general psychology courses at SGU to get a jump start on college. Jim followed in his father’s footsteps and attended USD, triple majoring in political science, psychology, and American Indian studies. This unique combination of majors allowed Jim to examine social issues with an interdisciplinary approach. The USD psychology department invited Jim to serve on the conference planning committee for Building Bridges, which brings American Indian high school students to the USD campus with the goal of building a bridge between their traditions and higher education to encourage them to pursue a higher education. The conference includes speakers and presentations that encourage students to persist in their education goals. 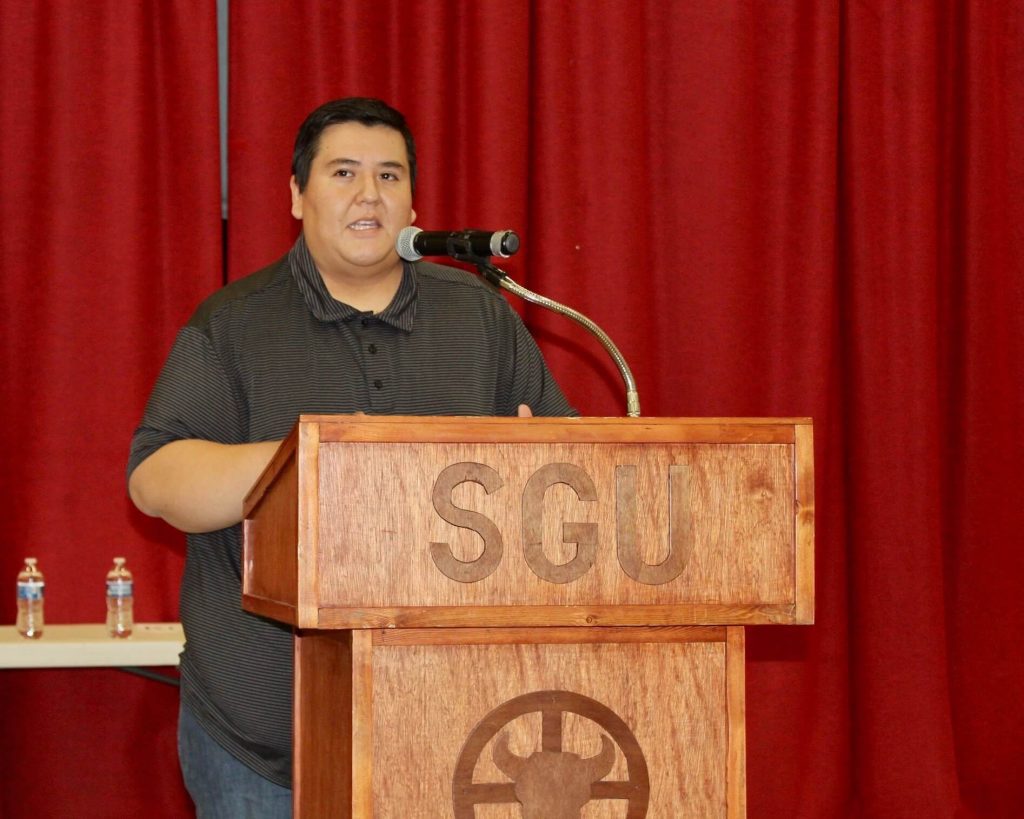 Jim has deep roots at SGU.

In November 2008, Jim became the director of the Adult Basic Education department at SGU. He was prepared to step into a position of this magnitude. Since he assumed leadership of the department, the GED program has gone through many changes. In 2013, Jim guided the department’s transition to computer-based GED testing in preparation for the new 2014 GED test series. He also implemented computer-based TABE testing, educational software, and a database to track GED student enrollment. With each new change, Jim took the time to train each tutor on the new technology. When the department began receiving funding through the American Indian College Fund to support its GED programming, Jim sought to get input from each tutor on their needs and ideas for new initiatives.

“Jim is always looking ahead and adapting to new technology and ideas to better the program. His mind is never stagnant and that keeps all of us learning and evolving as well. Jim is sincere in helping students have the best GED experience so he is always ‘upping his game’ to meet any challenges that our students may have. He always focuses on what our GED students and staff need, and I really appreciate that. I think his best quality is his character. He is a good, positive person to work with,” says assistant GED examiner Denise One Star.

GED tutor Debbie Burnette says, “Jim has been a great aspiration for me as a tutor. He is always available when I need help with any problem. He is very understanding and empathetic to all of us. I have learned a lot from him, and I feel it has made me a better tutor. Under Jim’s leadership the ABE program has come a long way. He is always striving to move forward to meet student and community needs.” 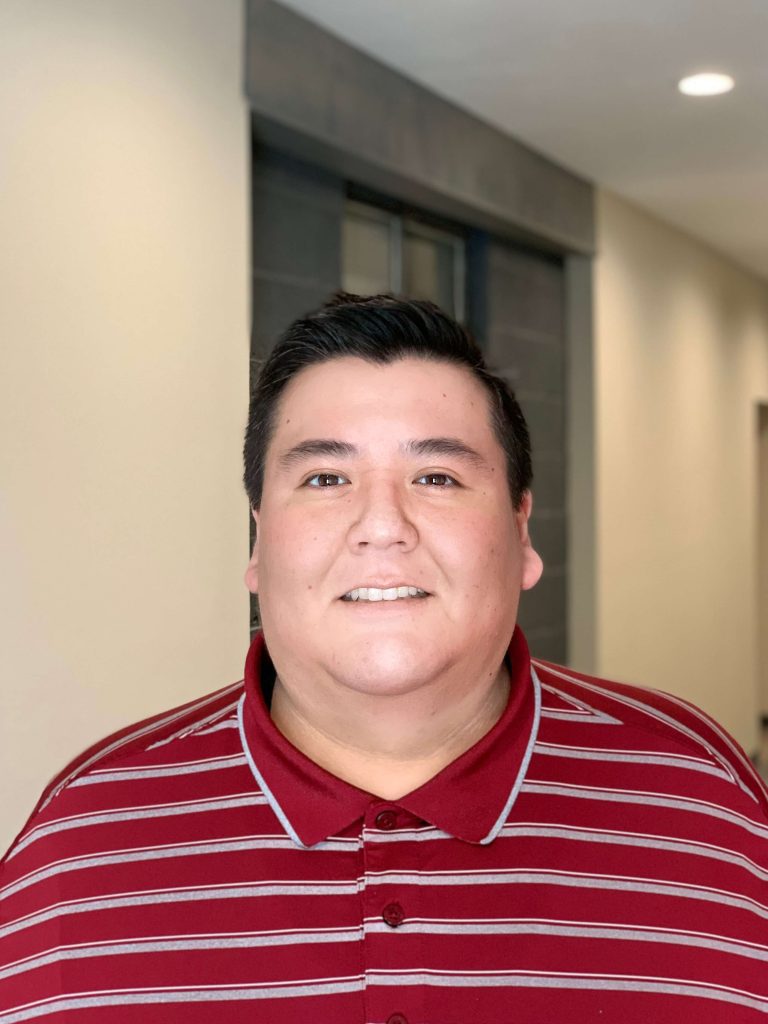 Jim’s impact extends across the university

Jim’s impact extends beyond the ABE department. Jim Green, co-director of the Institute for Indigenous Teaching at SGU says, “Along with his work as director of the ABE/GED program at SGU, we found out that Jim has developed key filming and editing skills. He surprised us by doing a video interview with one of the SGU GED students, then edited the video to create a very inspiring film. The university has successfully shown the film to community members and high school students who previously had not been sure if SGU had something for them. It didn’t take long for news of Jim’s video skills to spread around campus, either. This year he offered to help with SGU’s new teacher education concentration in Native Arts for elementary students. Jim has videoed presentations by traditional artists of Lakota doll-making and will soon be filming and editing key presentations on traditional Lakota porcupine quillwork. Quillwork is a highly prized art form among the Lakota, and Jim’s film work and editing will go a long way to help preserve and pass this art form on to the younger generation.”

We are so fortunate to have our director, Jim, as a part of our team. Jim has numerous leadership skills, including great vision, encouraging innovation, and he’s consistently fair and moves the program forward in a positive direction. His organizational skills have helped with productivity and his passion to help others shows through in all he does to help our students and the staff he works with.