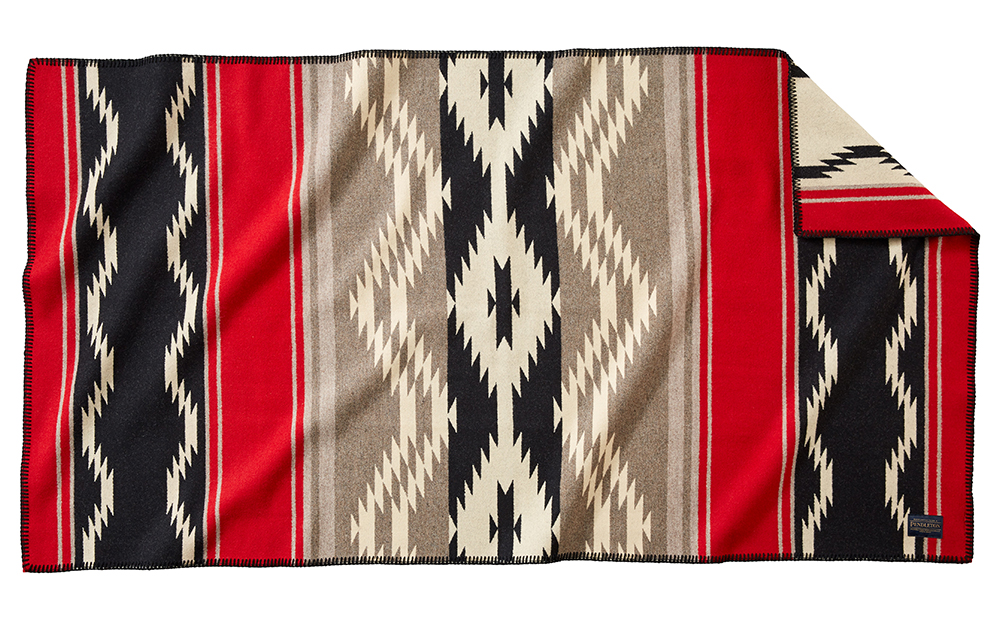 Denver, Colo., March 31, 2020 — In celebration of more than twenty years of partnership with Pendleton Woolen Mills, the acclaimed lifestyle brand and Wieden+Kennedy, the internationally known advertising agency, both of Portland, Oregon, the American Indian College Fund introduces the Special Edition Water Blanket, especially created for the College Fund 2020 public service announcement. Together, the collaboration of these two organizations, Wieden+Kennedy, with legendary director Joe Pytka, and Pendleton Woolen Mills’ weaving expertise, they created an exuberant and exciting message of the value of education and how it empowers.

The blanket was woven in Pendleton’s historic mill in Pendleton, Oregon, as one continuous piece of wool fabric 290 yards long, for the College Fund’s 2020 public service announcement. In the PSA, this exclusive yardage depicts how access to a higher education helps Native youth to reach their full potential and forge their own culturally vibrant and unique paths.  Their singular journeys help to poise them to serve as the next generation of Indigenous leaders, building a brighter future and stronger community. Indigenous people are not only a part of our country’s history, they are the future. Right now, 42% of Native Americans are 24 years old or younger.

After the filming of the service announcement by Wieden+Kennedy, the blanket was refashioned into 133 limited-edition, saddle-style blankets, each 60” x 32”, and named Special Edition Water Blanket. The blankets are available at www.pendleton-usa.com; retail cost $199.

Pendleton will donate a portion of the sale proceeds of Special Edition Water Blanket to the American Indian College Fund, benefitting Native Americans to access a higher education.

About Pendleton Woolen Mills – Pendleton Woolen Mills is a heritage brand and the leader in wool blankets, apparel and accessories.  Founded in 1863 and located in Portland, Oregon, Pendleton weaves iconic designs in two of America’s remaining woolen mills, located in Pendleton, Oregon and Washougal, Washington.  With six generations of family ownership, Pendleton is focused on their “Warranted to Be a Pendleton” legacy, creating quality lifestyle products with timeless classic styling.  Inspiring individuals from the Pacific Northwest and beyond for over 150 years, Pendleton products are available at Pendleton stores across the U.S., select retailers worldwide, and at pendleton-usa.com.

About Wieden+Kennedy – Wieden+Kennedy, founded in Portland, Oregon in 1982, is an independent, privately held global creative company with offices in Amsterdam, Delhi, London, New York City, Portland, Sao Paulo, Shanghai, and Tokyo.  Wieden+Kennedy works with some of the world’s most innovative brands, including AB InBev, Airbnb, Coca-Cola, Delta Air Lines, KFC, Instagram, Nike, Proctor & Gamble, Samsung, and Spotify.  Wieden+Kennedy was recently honored as Adweek’s US Agency of the Year and one of Fast Company’s Most Innovative Companies in Advertising. Learn more at www.wk.com.

Photos: Special Edition Water Blanket, front and back views.  This limited edition 60” x 32” saddle blanket was made from the singular specially woven blanket that appeared in the American Indian College Fund’s PSA.  It is available for sale on Pendleton’s website at www.pendleton-usa.com. The retail cost is $199; Pendleton will donate a portion of the proceeds to the American Indian College Fund.