Denver, Colo.—November 4, 2021– American Indian College Fund President and CEO Cheryl Crazy Bull was named a GlobalMindED 2021 Inclusive Leader on November 3 during a virtual awards ceremony. More than 3,000 viewers watched as GlobalMindED’s 2020 Inclusive Leaders named the 2021 winners who serve as role models of Inclusion, Diversity, and Equity (IDE) across 15 major industry sectors. The ceremony highlighted each recipient individually and featured inspiring stories of perseverance and success. This year’s Inclusive Leaders rooted in the Black, Indigenous and People of Color (BIPOC) communities were selected by GlobalMindED to honor each winner’s pioneering work, peer leadership, and inﬂuence among the ﬁrst-generation college student population GlobalMindED serves.

Upon accepting her award for service in non-profits at the 2021 GlobalMindED Inclusive Leader Awards Ceremony, Cheryl Crazy Bull said, “Justice happens when we are restored to the fullness life that our ancestors lived—rich with the abundance of resources, deep connections to land and family, and profound relations with Creation.” 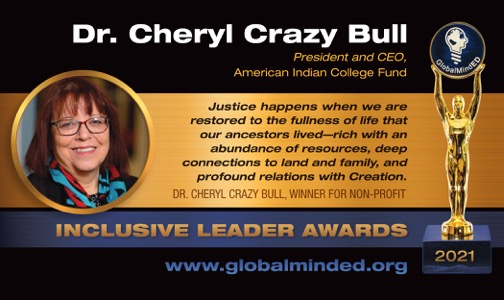 President Crazy Bull is a citizen of the Sicangu Lakota Nation and has served as President and CEO of the American Indian College Fund since 2012. A lifelong educator and community activist who grew up on the Rosebud Reservation in South Dakota, she has also been an advocate for Native American self-determination, the very foundation of sovereignty, her whole life. Her work ensures that Native voices, philosophies, and traditions are perpetuated through higher education and visibility, serving as the heart of the important work of building prosperity in Native communities for current and future generations.

Growing up in an extended family rich with cultural influences and relationships, President Crazy Bull attributes her success to her identity as a Lakota woman which was steeped in growing up in her family surrounded by her community. She says her identity is rooted in women having status and influence based on traditional Lakota teachings. While still in high school, President Crazy Bull was given her Lakota name, Wacinyanpi Win, meaning They Depend on Her, because her grandmother observed her taking care of others by making sure their needs were met when the family and community gathered. President Crazy Bull says she has carried the belief in being someone that others can rely on and trust to be supportive throughout her life and believes that being relied on and trusted also means using her voice to speak out and to act.

About Global MindED— Global MindED is a 501(c)(3) organization dedicated to closing the equity gap by creating a capable, diverse talent pipeline through connections to role models, mentors, and internships for least-resourced students, returning adults, First Gen to college, and the inclusive leaders who teach, work, and hire these students. GlobalMindED’s programs include its Inclusive Leader Awards program, a daily newsletter, a strong Summer Start Leadership program for college freshmen, monthly equity events, and an annual conference that will be held June 22-24, 2022, in Denver, Colorado. The Ph.D. Project strives to create a stronger, more diverse workforce. Through its unique model, the nonproﬁt organization’s Black/African American, Latinx/Hispanic American, and Native American members pursue business PhDs with the intent to become university faculty, teaching and guiding students who aspire to a career in business. El Pomar, a private, general-purpose foundation, accepts applications from 501(c)(3) organizations serving the state of Colorado in the areas of arts and culture, civic and community initiatives, education, health, and human services.