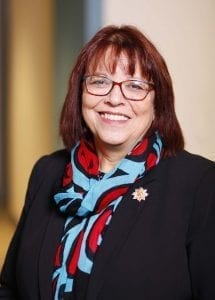 I can’t think of a better metaphor for the need for respectful visibility of Native people in America than the Washington football team’s announcement that it will be changing its name to the Commanders—on Groundhog Day.

At the American Indian College Fund, we are relieved that the Washington team has finally changed its former offensive name. We are deeply thankful for the tireless work Native advocates and allies have done over the years to get the team to this point. But like the movie Groundhog Day, in which the protagonist is stuck in a time warp where every day is the same day and events repeat themselves, every day in Indian Country there is more work to be done eradicating racist mascots and place names. And each day at the national, college and university, and K-12 school levels, we are met with the same arguments and the same resistance.

This important work needs our support because research shows racist mascots harm the self-image of children and impact their education performance. We must continue to eradicate racist mascots and place names that fetishize Native people once and for all.

We urge you to join us as we lend our voices to our Native allies and sister organizations in calling for an apology from team owner Dan Synder. An apology acknowledges harm, and there is no doubt that Native people, especially our children, were and are harmed by mascots which dehumanize and exploit us. We also encourage the Washington Commanders to consider how they can mediate the harm that was done (and continues to be done until they publicly acknowledge that harm) by providing educational support, mentoring, and internships for Native students. When we are on the football field, in the front and back offices of sports teams, and are respectfully represented in marketing, we will make headway to healing some of the harm that has been done.