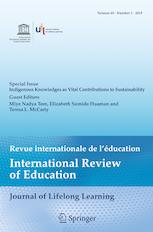 From curricula to campuses, tribal colleges and universities, which serve communities on or near Indian reservations, are rooted in Indigenous cultural beliefs. Cheryl Crazy Bull, President and CEO of the American Indian College Fund, with Emily White Hat, Director, Strategy and National Outreach of the College Fund, have published a scholarly paper exploring how tribal colleges and universities (TCUs) incorporate tribal values and knowledge of land sustainability and ecology into their institutions, making them substantially different from other academic institutions. Both women are also members of the Sicangu Lakota nation in addition to their roles at the College Fund.

The article, titled Cangleska Wakan: The ecology of the sacred circle and the role of tribal colleges and universities, is available in the International Review of Education, 65(1), 117-141. A Digital Object Identifier, to help readers find the article more easily in print and online, is 10.1007/s11159-018-9760-8. The paper is also available online at the International Review of Education website.

About Cheryl Crazy Bull—Cheryl Crazy Bull Sicangu (Rosebud) Lakota has nearly 40 years of experience working in education with American Indian institutions. Since 2012 she has served as the President and CEO of the American Indian College Fund. From 2002-2012 she served as the President of Northwest Indian College (NWIC), a regional tribally-controlled institution located on the Lummi Nation in Washington State. She led the college’s transition to a four-year degree-granting institution and completed substantial construction campus improvements while there. Prior to joining NWIC, Crazy Bull was the superintendent of St. Francis Indian School and held teaching and administrative positions at Sinte Gleska University, both on her home reservation of Rosebud in South Dakota. Crazy Bull graduated from the University of South Dakota with a bachelor’s degree in business management and South Dakota State University with a master’s degree in education administration. She was an outstanding alumna of the South Dakota State University College of Education and received a special achievement award from the Rosebud Sioux Tribe for this accomplishment.

About Emily White Hat— Emily R. White Hat, Sicangu (Rosebud) Lakota, is the Director of Strategy and National Outreach at the American Indian College Fund where she is working with tribal colleges and universities to develop and implement capital infrastructure projects, assists in capacity building, concept development, strategic planning, and national outreach. Prior to joining the College Fund, Emily worked as a project evaluator at Sanford Research/Health in Sioux Falls, South Dakota in the Center for Health Outcomes and Prevention. Emily also worked as program manager at the National Congress of American Indians Policy Research Center in Washington, D.C. where she managed and conducted research on a Native American Research Centers for Health-funded project and in the areas of public health, public health law, and veterans’ issues. She served as an expert panel member for the University of Washington Indigenous Wellness Research Center ETHICS research project focused on increasing American Indian/Alaska Native research engagement through a culturally adapted ethics training. Emily received a juris doctorate and a natural resources law certificate from the University of New Mexico School of Law. She has a bachelor’s degree in forestry with a concentration in Fire Science and a minor in rangeland ecology from Colorado State University, and an associate of arts degree in Lakota History and Culture from Sinte Gleska University.