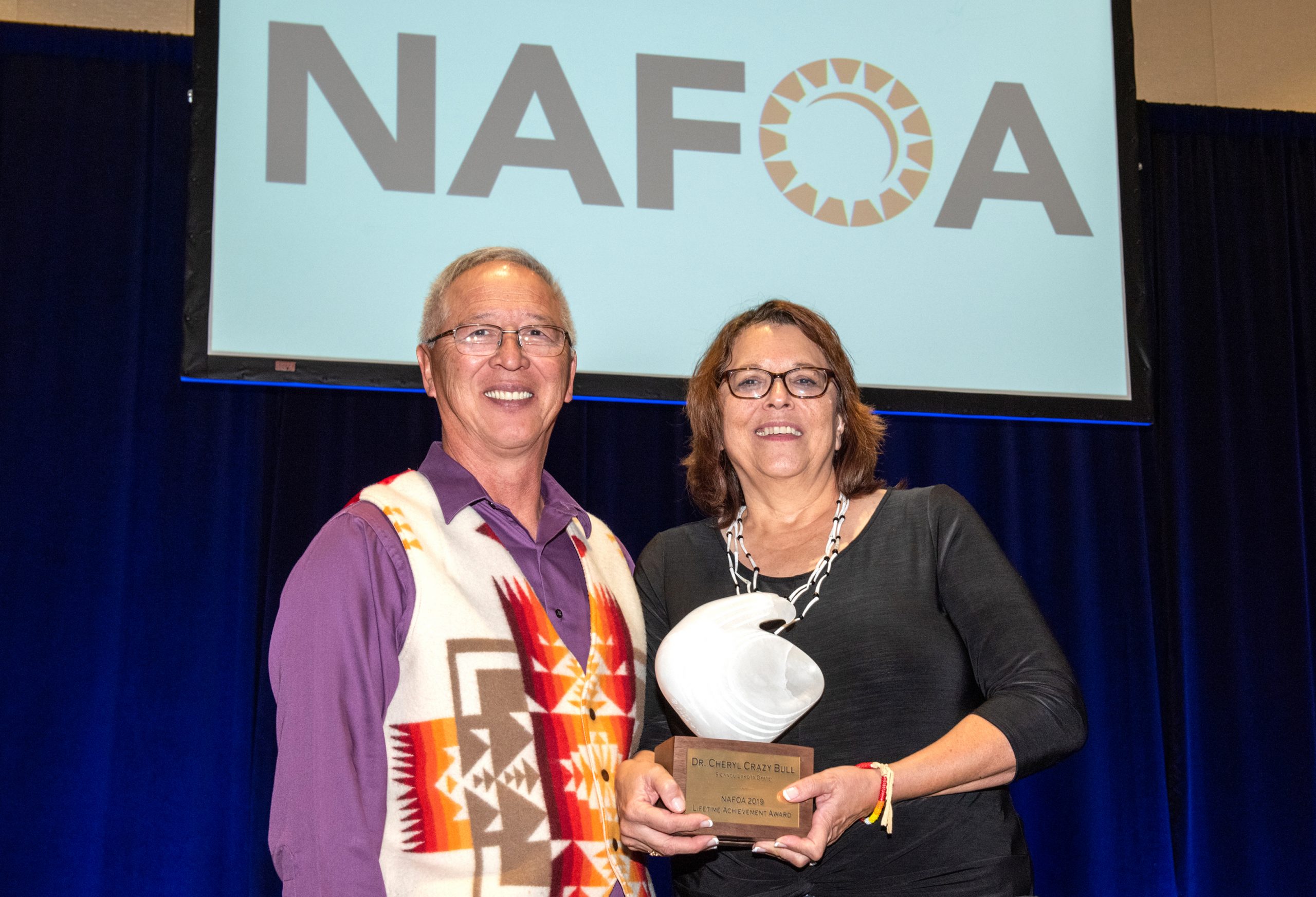 Cheryl Crazy Bull (Sicangu Lakota) President and CEO of the American Indian College Fund, was awarded a Lifetime Achievement Award on Tuesday, October 8 by the Native American Finance Officers Association (NAFOA). For the past 12 years, NAFOA’s Board of Directors has selected and recognized strong Native American leaders who have brought about positive economic change for both their communities and Indian Country throughout the course of their careers.

Crazy Bull was selected for the award for her work over the years representing Indian Country and her tireless advocacy to increase the ranks of Native Americans achieving a higher education.

NAFOA’s First Vice-President VaRene Martin of the Thlopthlocco Tribal Town and Muscogee (Creek) Nation remarked, “I’m continually impressed by Indian Country and our Lifetime Achievement Awardees are no exception. The NAFOA Board chose both Governor Anoatubby and President/CEO Cheryl Crazy Bull for their commitment to Indian Country and industrious spirit to work for constant innovation and improvement locally and nationally. NAFOA is one of many who appreciate these leaders and I’m excited to see the dividends from their investment improve Indian Country and beyond.”

Cheryl Crazy Bull, President and CEO of the American Indian College Fund, said, “I thank NAFOA for this recognition of my lifelong commitment to tribal sovereignty through tribally controlled education. In some ways, with this recognition, I have come full circle. Business and economics are of special interest to me, as I began my career as a faculty member teaching business courses. I appreciate the vision, focus, and diligent work that we do that shows the transformative power of education. And I want to thank my family and friends. When one of us is honored, all of us are honored.”

Cheryl Crazy Bull, Wacinyanpi Win (They Depend on Her), was honored for her lifelong dedication to Indian Country as an educator and community activist. She has served as President and CEO of the American Indian College Fund since 2012. She previously dedicated 17 years to Sinte Gleska University in various faculty and administrative roles, followed by a 10-year tenure as the President of Northwest Indian College, headquartered on the Lummi Nation in Washington.

Crazy Bull’s research and publications are focused on tribally controlled education, leadership, and educational equity. Beyond her work as an educator, she also promotes tribal economic development and entrepreneurship, having served on both the economic development committee of the Rosebud Sioux Tribe and Lummi Commercial Company. She helped found a circle banking program on her home reservation, the Rosebud Reservation.

Among her many honors, Crazy Bull has been recognized with an honorary cultural degree from Sinte Gleska University and an honorary doctorate from Seattle University. She is also the recipient of numerous awards as an Indigenous woman leader and tribal educator, including the 2017 Woman of the Year from Women Supporting Women; 2015 Honoree, Drums Along the Hudson, and a recipient of the 2011 Enduring Spirit Award.

Crazy Bull and her spouse, Alex “Red” Prue, Sr. live in Colorado, where they enjoy the Rocky Mountains and scenic prairies and do their best to keep track of their blended family of seven children and over 25 grandchildren and great-grandchildren.

About Bill Anoatubby: Bill Anoatubby began his career with the Chickasaw Nation in 1975. As Director of Tribal Health Services, he made an immediate splash by implementing rules and regulations for his new department. Shortly thereafter, he was promoted to the accounting director, where he was responsible for centralizing all finances of the tribe. Many successful policies and procedures that he instituted are still in use today across the Chickasaw Nation.

When speaking of the leadership insights developed during his early career Governor Anoatubby stated, “Accounting plays an important role beyond taking care of the money. It’s our job to not have errors and hold the reputation of our nation to the highest standard. Service to the organization is a service to the people.”

When Governor Anoatubby was elected in 1987, the Chickasaw Nation had 250 employees and $11 million annual operating budget. In reference to his commitment to fiscal responsibility during his first years in office, Governor Anoatubby remembers borrowing paper clips in an effort to conserve funds. Today, the Chickasaw Nation employs nearly 13,500 people. Funding for tribal operations has grown exponentially and tribal assets have grown twenty-fold. Governor Anoatubby is committed to meeting the needs and desires of Chickasaw people by providing health care services, opportunities for employment and career advancement, heritage, and cultural preservation and the chance for every Chickasaw to obtain a higher education.

Governor Anoatubby was born in Texas, the youngest of six children. He returned with his family to live in Tishomingo, Oklahoma the capital of the Chickasaw Nation as a young boy. While still in high school, he enlisted in the National Guard and served throughout his college years. He achieved the rank of staff sergeant and command of a light truck platoon and was honorably discharged in 1971. Anoatubby graduated from East Central University in Ada, Oklahoma, earning a bachelor’s degree in accounting.

Governor Anoatubby is married to Janice Loman. They have two sons, Brian and Chris, and five grandchildren.

About NAFOA: NAFOA is a national non-profit organization whose mission is to strengthen tribal economies by: promoting excellence in financial management, advocating sound economic and fiscal policy, developing innovative education initiatives, and providing essential information, resources, and support to meet the challenges of economic growth and change. For more information about the organization, visit www.nafoa.org.