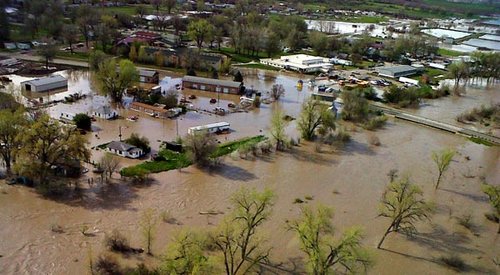 Hundreds of American Indians have been displaced from their homes across Montana and North Dakota. Little Big Horn College in Eastern Montana, which serves the Crow Nation, and United Tribes Technical College in Bismarck, North Dakota are serving their hard-hit communities as the command centers for the disaster, providing shelter, food, and clothing to those in need.

Two other tribal colleges, Cankdeska Cikana Community College in Fort Totten, North Dakota; and Fort Belknap in Harlem, Montana have been threatened by the rising waters, which have cut off roads and tainted the drinking water supply. But the worst is yet to come. A record snow pack and runoff water raising the Missouri River to record levels is straining dams, which are already at their breaking points.  In the coming weeks, officials will release millions of gallons of water down the already full waterways to try to save the dams.  In addition to Montana and North Dakota tribal colleges, which are facing the worst flooding situation in history, as the waters continue to rise, flooding also threatens thousands more and tribal colleges in South Dakota and Nebraska.

Although things are slowly getting better on the Crow Reservation, where people are being permitted to return from temporary housing in Billings and the 10 p.m. curfew was lifted today, students, their families, and the tribal colleges at Crow Nation and in Bismarck are still in urgent need.

The American Indian College Fund has set up a flood emergency fund to provide affected students with food, clothing, housing, transportation, and supplies. Your donation will also help us disperse funds to tribal colleges in the affected regions to defray the costs incurred for emergency relief efforts. Please donate generously today!