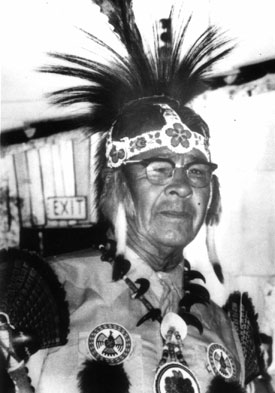 Centered around the threat of the U.S. Government termination of the Turtle Mountain Band of Chippewa tribe in North Dakota, Louise Erdrich’s novel The Night Watchman takes us on an Indigenous journey inspired by her grandfather, Patrick Gourneau, a former tribal chairman of the Turtle Mountain Band of Chippewa and a night watchman. Gourneau serves as the inspiration for one of the protagonists, Thomas Wazhhashk, whose last name means muskrat in the Ojibwe language.

Thomas is the night watchman who patrols a jewel bearing plant at night, on the lookout for intruders or anything unusual. His job serves as metaphor, for Thomas also becomes a watchman for his tribe as threats of the federal government’s planned tribal termination loom for the Nation of the Turtle Mountain Band of Chippewa.

Within this tribal community we meet Patrice, Vera, Roderick, Wood Mountain, Millie, and many others who make a hot, comforting, and complicated stew, perhaps one as our beloved character Juggie would cook up. Erdrich takes us from the reservation to the city of Minneapolis, Minnesota, where reality becomes distorted. Just as looking through a glass of water blurs our vision, characters’ experiences become distorted from water tank performances to crestfallen souls searching for their lost loved ones and place: a place to call home, a place to rest.

Our journey continues as the threat of federal termination of the Turtle Mountain Band of Chippewa takes Thomas to Washington, D.C., where the reader observes Thomas and Senator Arthur Vivian Watkins (a real-life tried-and-true proponent for the termination of the federal recognition of American Indian tribes) politically debate their stances and future of Thomas’ tribal nation.

Throughout his journey, Thomas’s consciousness manifests itself as Roderick, a spirit, and Roderick manifests himself as Thomas’ consciousness. One simply could not exist without the other. As Thomas leaves D.C., the mental and emotional weight of his experience spikes, then dissolves. Roderick becomes free to find his place, to be among the ancestors and to be so un-ghostly.

Our community members return from their personal experiences sharper, shrewd, more loved, more assured, clearer. And our hero Thomas Wazhashk returns more embodied in his muskrat namesake as the story comes full circle. “Wazhashk gidizhinikaaz (your name is in Ojibwe).” And the answer: “… the wazhashkag (muskrats) were numerous and ordinary, they were also crucial. In the beginning, after the great flood, it was a muskrat who had helped remake the earth. In that way, as it turned out, Thomas was perfectly named.” 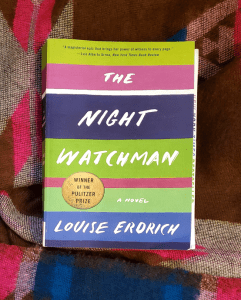 The Night Watchman by Louise Erdrich. Available at Birchbark Books.

Erdrich’s characters exist in liquid states that move from evaporative wisp-like existence to those slippery like mercury. Her writing is fluid, and although the introduction of characters can read like a Russian novel, the story lines remain tight. We begin to care as character dimensionality develops and our rhythms sync with their story. Our footsteps align with those of Patrice and Vera, and we begin to hear the conversations between Thomas and Roderick. Their liquid states become more solid as we the reader become more fluid to their story.

The Night Watchman absorbs you into the folds of Indigenous history, velvety characters, and imagery, and in turn the reader is absorbed by Erdrich’s fluid and compelling storytelling.